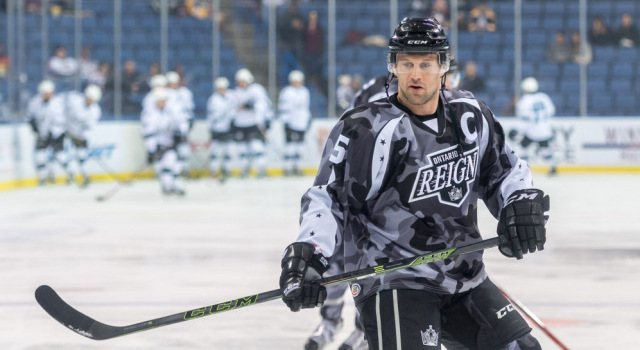 Goalie Peter Budaj, defenseman Vincent LoVerde and winger Michael Mersch have been selected to represent the Ontario Reign at the AHL All-Star Classic.

“It’s an honor,” said LoVerde, the team’s captain. “I’ve played in this league for a few years now and it’s an honor. Obviously my teammates and coaching staff and everyone’s been integral in this process and we’ve had a great year as a team and look forward to it continuing.”

The All-Star Classic will take place in Syracuse, N.Y., over Jan. 31 (skills competition) and Feb. 1 (game). You can see the full list of players and more details from the AHL here. The game will feature a new 3-on-3 and 4-on-4 format and pit the All-Stars from each division against one another.

LoVerde is one of five players on the team that’s played in every game. If time on ice was an AHL statistic his numbers would be right up there in the tops for Ontario, as he plays in every situation. He has three goals and 11 assists.

Budaj has been backbone for the Reign and his stats in every goaltending category have floated from either in the league lead or close to it all season. He currently leads the AHL in goals against (1.69), wins (17), shutouts (4, tied with 2) and minutes (1565:32). Budaj’s save percentage (.930) is fourth in the AHL. It’s been a turnaround of epic proportions for Budaj, whose career was nearly stamped as over during a trying stretch last season with St. John’s (AHL) where he had no wins and a GAA over 3.50.

“Definitely it’s a great honor for me to represent my team, organization and my family too,” Budaj said after Friday’s win over Stockton. “I’m very proud, very thankful. I’m glad I’ve been playing well but also it’s a reflection of our team. The team in front of me is playing really good. When you look at the standings that’s why we are on top. We’re playing well, everybody.

“It’s very satisfying. I’m very thankful I was able to get a chance here, stay healthy and work hard and got a chance to play on such a good team that we have here. Everything has been going well for us and I’m very happy for that. It feels very special. Last year was tough on me and my family. I try to persevere and stuck with it and work hard and it’s paying off right now and I’m very thankful for that.”

Mersch has been out of the Reign lineup the last 10 games after his call-up to the Kings nearly a month ago, but his 12 goals still lead the team. The 23-year-old left winger has one goal and one assist in 12 NHL games. It’s unclear if he will attend.

“It’s a great honor for those guys,” said Reign head coach Mike Stothers, who himself will coach the Pacific Division All-Stars. “They’ve all done a great job and Merschy’s up in L.A. right now, so I don’t know if he’s going to be back to participate in it. His numbers alone warranted him being selected.

“Both Buds and Vinny are a great example for everybody here on our team and everybody in the American Hockey League. Buds is in St. John’s/Newfoundland last year, has a hard time even getting in the net because he’s backing up (Connor) Hellebuyck. Then, he never even got a win. When you look at that at that stage of your career you’re probably thinking, ‘hey, man, this is over,’ and he’s come in and just proved that there’s a lot of life left in Peter Budaj.

“And Vinny, he started right here, in the East Coast (Hockey) League. He’s a captain of a Calder Cup championship team and he’s an AHL All-Star. … It’s awesome and it’s inspiring for everybody else that’s here. It’s never too late. You never give up and you just keep plugging away and hopefully things will continue to go for all three of them in a positive direction. And maybe we’ll see the other two join Merschy up in the NHL. That’d be great.”

LoVerde is looking forward to the trip, see some snow, check out the town and hopefully bring some of his family with him.

“I’ve never been to Syracuse,” he said. “I’ve heard it’s a very fun town, very fun city. So yeah, excited to go out there.”