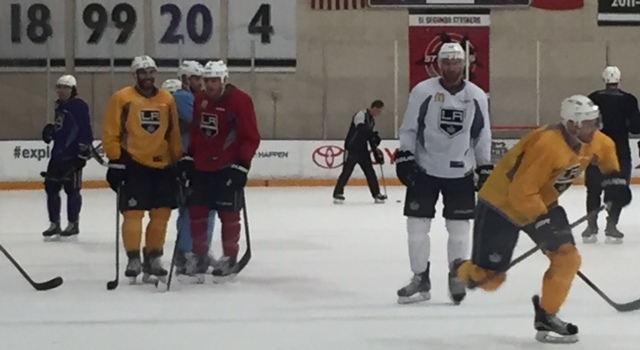 Hello to you and yours from rainy and cold El Segundo, where the Kings took part in a fairly lengthy practice the morning after a day away from the rink. The forwards were color coordinated by jersey and aligned as such:

-Hello, Jeff Carter. The Kings center skated in between Tanner Pearson and Marian Gaborik during drills involving lines, which is a good sign that he could be ready to play Thursday night against the Toronto Maple Leafs. In speaking with Carter briefly after practice, he said he felt fine and that his status was the “same.” There are no firm indications, only hints, that Thursday could be day that he’d rejoin the lineup, but we’ll have to wait for line rushes at tomorrow’s morning skate for any clearer sense. Darryl Sutter shared what Carter’s presence means to the team’s performance in an interesting discussion about possession, but as for any clear pronouncements of Carter rejoining the lineup, there weren’t any on Wednesday.

-More good stuff to come from Darryl shortly, as well as Drew Doughty and Jonathan Quick reactions to being named to the All-Star Game. I have an appointment from 3:00 to 5:00, so bear with a delay in the afternoon. Enjoy your Wednesday, Insiders.