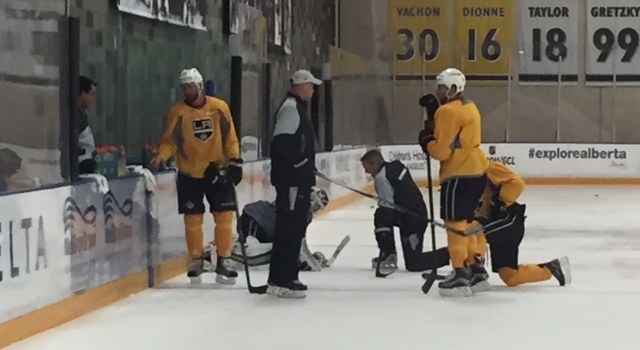 -Good afternoon from the skies above Southern California. The Kings are en route to Denver, where they’ll face the Colorado Avalanche on Monday night. Jeff Carter did rejoin the team on the last trip, but because this is a one-off road game, I asked Darryl Sutter whether Carter would travel on this quick jaunt. Sutter confirmed that Carter would travel with the team to Denver.

-I also checked in with hockey operations during practice and was told there’s “nothing new to report” on Kyle Clifford’s status. Clifford suffered an upper-body injury when elbowed in the face by Victor Hedman in a 3-1 win over Tampa Bay on December 6. Since leaving the team at the outset of the Great Lakes and Eastern Canada trip, he has not resumed skating.

Darryl Sutter, on whether the Kings have played a “complete game” recently:
I don’t think so at all. Quite honest, I think we can clean our game up. I don’t think there’s any difference in our game. [Reporter: Because there seemed to be some long stretches where you guys have been pretty dominant.] When we’ve won as many games as we have, I’d say that’s been pretty consistent. I think there’s times – I’ve said it all along – there’s times we have to get more out of our third pair and we’ve got to get more out of our third line, so now Kinger and Lewie and Brownie have been a little bit better, so that’s helped us getting them in the lineup. I’d like to get more out of our fourth line in terms of not being in their own zone for as long as they are, things like that. [Reporter: Again on the road, it seemed like the relentless forecheck was back. What are your thoughts on that?] Quite honest, I don’t think that’s as much as everybody talks about. I think that most of our chances, especially with Kopi’s line, are on the rush. For sure, without Carter out of the lineup, we need to get more out of that line, whoever’s there. They haven’t done much on the forecheck in the last couple games, at all. Tanner’s game’s come back a little bit, but I think the forecheck is not just related to the forwards. Our whole game is how our defensemen move pucks and the forwards getting open for ‘em, so if that translates into offensive zone time, that’s not necessarily forechecking. That’s entering with the puck and holding on to the puck. [Reporter: Well, that’s something else I noticed. It looks like you guys are breaking out of your zone a little easier and cleaner the past stretch.] I think that the four guys who play a lot of minutes have been pretty effective, and you see it at times during these games, in this stretch of games, where when they’re out there too much, they aren’t as effective, and that’s again, based on trying to get some more out of the other guys.

-The practice was optional, with Carter, Christian Ehrhoff, Derek Forbort, Jamie McBain, Michael Mersch and Jordan Weal getting some work in with Jhonas Enroth. A good amount of the skate was devoted to providing a netfront presence and the forwards trying to deflect point shots past Enroth.