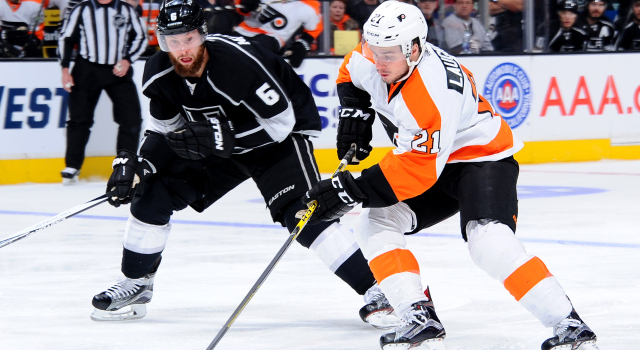 Michal Neuvirth, on whether lapses in defensive play cost them:
Yeah, I would say that we we’ve got to make sure that we don’t turn the puck over, especially at the blue line and especially early in the game. Hockey is about mistakes and we [made] a couple in the first and it cost us the game.

Neuvirth, on how he would explain the slow start to the game:
I wish I knew. I don’t know. For me as a goaltender, I’ve got to be ready right from the start and I thought I was.

Brayden Schenn, on why the team played better in the third period:
I don’t have the answer for that. But when you’re playing a good hockey team like them, you can’t take two periods off and hope to win the hockey game. We made a push there in the third and that’s how we’re capable of playing. You’ve got to bring 60 minutes definitely against good teams and obviously tonight we didn’t.

Wayne Simmonds, on whether playing with 11 forwards was a challenge for them:
Yeah, it was alright though. I didn’t really mind it too much, but you don’t really notice once you’re in the flow of the game. You kind of just go in and you don’t really pay attention to the numbers. Sometimes coach switches up the lines anyways and you go with different guys. I don’t think it was that much of an adjustment.

Radko Gudas, on his turnover that led to Los Angeles’ first goal:
Obviously a bad turnover, we’ve got to make sure that we don’t make them and that cost us the game unfortunately.

Dave Hakstol, on the team’s struggles in the first period:
I can’t lump it all together for the entire year. I can tell you tonight, three turnovers on one shift leads to the first goal against. That has to change. That’s got to be on us. It’s absolutely on us to change that outcome.

Hakstol, on why he chose to go with seven defensemen and 11 forwards in the lineup:
I think, number one, as a group we really haven’t played well the last couple nights, not consistently through 60 minutes. We’ve got eight healthy defensemen. There’s a competition there, maybe a little bit fresher legs in the lineup for 60 minutes for the group on the backend. On the frontend, honestly, I think we need a little bit more out of everybody.

Hakstol, on whether he’s worried about the lack of offensive production:
No, what I’m worried about is winning games. Whatever number of goals we have to score to win a hockey game is the number that I’m worried about. I’m not looking at your question in that way. Tonight we needed to get another. I’m most worried about giving up the first one the way we did and then our push in the last 20 minutes of this hockey game came up a little bit short to tie it up.