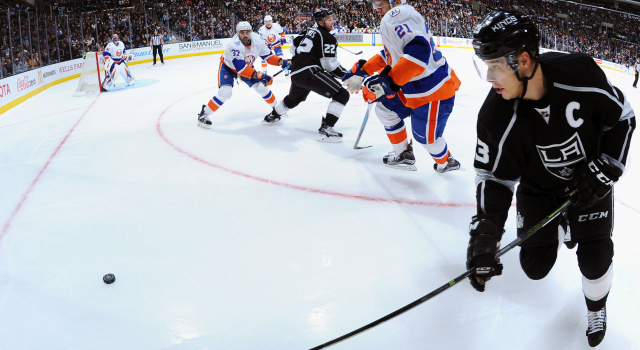 Though Jeff Carter isn’t expected to play against the Calgary Flames tonight (6:00 p.m. / FOX Sports West / KABC 790 / I Heart Radio), the Los Angeles Kings will feature an important role player in the lineup for the second consecutive game.

After Dwight King immediately struck a chord with line mates Trevor Lewis and Dustin Brown in a 5-2 win over Edmonton, that trio will again look to maintain an effective forecheck and work down low against a Calgary team that saw its 11-game home winning streak come to an end in a 1-0 loss to Anaheim Tuesday night.

Brown, who took a puck under his visor in Tuesday’s win and displayed a string of stitches that snaked from his upper lip towards his nose when he met with the media this morning, discussed the methods in which Los Angeles has been able to get its game going.

“…I think we’ve been good on the forecheck, and when we’re good on the forecheck, that’s when we can dominate games, because we get the puck back and we’re a possession team – everyone knows we’re a possession team – but a lot goes into that, and it really actually starts in our own zone,” Brown said. “To be able to forecheck really well, we have to make good plays coming out of our zone and through the neutral zone and be connected. There’s those game where we’re struggling to get out of our zone, and as a result our forecheck is too far, guys are too far apart on the forecheck, and then we’re playing one of those games. I think this road trip we’ve been really good coming out of our zone, going into theirs.”

Interestingly, the home team’s challenges in sustaining a consistent attack in the shutout loss two nights ago originated from the Ducks’ success in neutralizing “a Flames squad which was intent on using the stretch pass, even though it wasn’t working because the forwards were too far up-ice for the defencemen to feed them pucks,” as Randy Sportak wrote in the Calgary Sun.

In other words, the Kings will be facing a team that struggled against a heavy opponent that relied on an effective forecheck on Tuesday.

“I think that’s a huge part of [our success],” Brown said. “I mean Lewie and Kinger, that was actually our line in training camp until Kinger went down, so we built some chemistry there, and I’ve played with both Lewie and Kinger through the years, so I think we understand what makes us successful collectively, and I think [Tuesday] night was a result. Kinger coming back, he had a big impact on the game, but it’s the same thing the night before with Andy in the middle of me and Lewie, or Shoresy, was just me and Lewie get in there really quick and can help each other out a lot.”

Dustin Brown, on the unheralded aspects of Dwight King and Trevor Lewis’ play:
I think they do a lot of things that are unseen by pretty much everyone outside this group. I mean everyone looks at, it’s part of the game but, goals and assists and those types of stats, and those guys chip in in those departments, but they help our team in so many different, little, subtle ways that make us a better team top to bottom, so they’re guys that are appreciated within this room for sure.

Brown, on Lewis and King:
Yeah I think the other thing that goes into it is experience, they both have played in big moments and understand what it takes, so what little bit of a changeover we had, those guys become more important with guys coming in with a little less experience.

Trevor Lewis, on how he builds success with King and Brown:
Yea I think it’s three bigger bodies that get in on the forecheck, I think when we do get in on the forecheck we do well in holding onto pucks and keeping the cycle going and getting pucks to the net, so I think it all starts there, and making sure that we’re good in our zone, being quick out of there so we can have a little more energy in the offensive zone.

Lewis, on returning to play with King and Brown again:
Yeah, I mean it’s great, I love playing with both of those guys, I mean obviously through the years we’ve kind of all played all over the place and played with each other, so I kind of know what the other guys do, and it’s great to have Kinger back and back in the lineup.