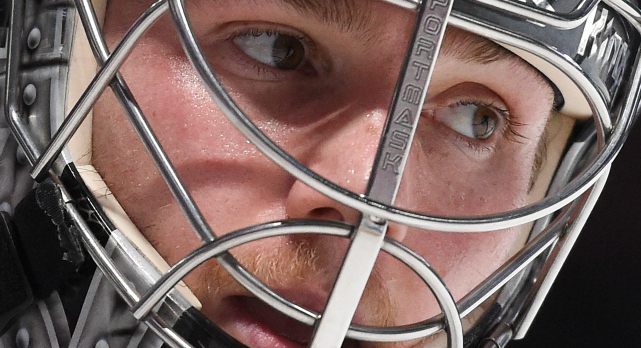 Though the Kings’ offense has been notable with a 14-goal performance through the first three games of this four-game Pacific Division road trip, Jonathan Quick has been stellar dating back to late November. He’s 11-2-1 with a 1.89 goals-against average and a .932 save percentage (856:44 minutes / 398 SA / 371 SV) over his last 14 games, dating back to the 3-1 win at Florida on November 23. With two shutouts over that span, he has tied Frank Brimsek and John Vanbiesbrouck’s records for the most shutouts by an American goaltender with 40. There’s also an interesting ESPN Insider article by Craig Custance that was posted earlier today discussing whether Corey Schneider (or another goalie) could unseat Quick as the United States’ starter at the upcoming World Cup of Hockey (and a Dimitri Filipovic PDOcast to go along with it). Given Quick’s tendency to raise his play on the highest stages, that’s probably unlikely.

Given that Quick has already won a pair of Stanley Cups to go along with a Conn Smythe Trophy and was a 2012 Vezina Trophy finalist and the Americans’ starter at the 2014 Olympic Games, is there much that Goaltending Coach Bill Ranford has to tinker with on a daily basis? I spoke with Ranford yesterday afternoon to find out.

Bill Ranford, on fine tuning Jonathan Quick’s game:
We’re working on his game every day. We’re always trying to analyze things that try to make him better, but not over-analyze. But there are always areas that you can continue to work on, and it’s not always necessarily always just from the goalie’s standpoint, it’s from the team’s standpoint. I think that’s one of the things that John Stevens has been a big part of, is our goalies and D working together to be successful, and that’s, I think, really helped.

Ranford, on Quick’s 40 career shutouts:
I think it’s an amazing feat, and he’s just getting into the thick of his career right now. It’s pretty impressive with what he’s done throughout his career. But it also has to do a lot with the way the team plays in front of him. It’s not just the goalie, you’ve got to give credit to what our guys do in front of him and help him see the puck and clear rebounds. That’s kind of a group effort.