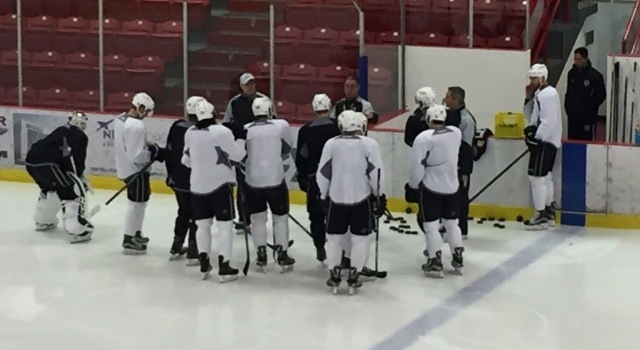 Hello from a taxiway at YEG, where we’re about to embark on what we’ve been told should be a 37-minute flight.

The Kings practiced this afternoon in Leduc, a suburb of Edmonton. It’s a terrific facility with curling sheets and indoor soccer and lacrosse fields in addition to the several ice surfaces. It is a large enough facility that it has its own Dairy Queen. I know the LAKI commenting section isn’t exactly mallard friendly, but the Ducks’ plans to partner with the city of Irvine to build a brand new and similar multi-sheet facility at Orange County Great Park is a boon for Southern California hockey, and if you are a Kings fan who lives behind the Orange Curtain and plays recreationally, this will benefit you. Speaking of the Ducks, there were some player and staff sightings in the hotel lobby earlier this morning as Los Angeles was getting ready to depart for practice and Anaheim was waking up after a nighttime arrival.

The practice was led by John Stevens, Davis Payne and Bill Ranford, and most of yesterday’s scratches and those who generally don’t earn as much ice time participated. Both Dwight King, who appeared in his first game yesterday after recovering from a lower-body injury, and Jeff Carter (upper-body) were on the ice, though Carter wasn’t always a participant in the team’s drills, and it still appears as though it may be a bit of a stretch to expect him to play Thursday night in Calgary.

As for King, that he would be able to play last night was hastened by a quick on-ice recovery.

“We kind of had a timeline headed into the break, and obviously the three days of skating there really helped,” he said. “I had to get cleared there first for it to come true, but that happened and I got to play.”

Jeff Carter, on whether he’s closer to returning:
I feel all right, we’ll see what happens.

Carter, on what he’s seen from the team over the past three games:
Two great games by the guys. I think the guys have had a chance to be in some different positions and whatnot, you know obviously Kopi and Toff and Looch have been playing great and leading the way, and I think all around, a good team effort by everybody involved. I think when you do that, and you have everybody on board, and everybody’s sticking to the game plan, that shows what we can do.

Carter, on whether his leadership qualities have progressed:
Yeah, this is my eleventh year in the league right, so you’ve gotten to the opportunity to play with a lot of good veteran guys over my years, and with us losing a lot of vocal leaders in the room, it was an opportunity for a lot of us to step up and take a bigger role in it. I enjoy it, I know I’m not the most vocal guy, but it’s something that’s been coming more and more. It’s been a lot of fun, I enjoy it. There’s a lot of other guys in the room that have stepped up this year too, and it’s been good to see.

Carter, on Drew Doughty wearing the “A”:
I think it’s great for him. You know obviously he wants to be one of those guys, and he is one of those guys for us. Like I said, there’s a lot of guys in the room that have stepped up, and he’s one of the guys, in a big way. He’s really come along in that aspect, every game you see him more and more getting into it, so it’s been good for us.

Dwight King, on how he feels after his first game back:
I’m good. Like I kind of said, I’ve kind of been preparing myself, skating leading up to the game was probably even a little tougher than the actual game itself, so the body feels good today.

King, on how his body felt during the game:
I was just a little more tired at the end of the game, and then maybe worried about being fresh today and feeling up to par, but I had a good rest and I feel good today.

King, on the challenges of moving from his first to his second game back:
It’s obviously a mental preparation kind of thing, just continue to kind of build with my linemates. We play pretty much a similar game, it’s a lot of forechecking which will lead to opportunities, and just try to contribute the best you can.

King, on whether his line’s performance was a “best-case scenario”:
Yeah, I probably would say that. It kind of worked out picture perfect, everybody got on the board and we had opportunities, so that’s good to see.

King, on whether he now has more sympathy for players who recover from lower-body injuries:
Yeah, that’s probably the toughest part for any lower-body injury, is maybe not being able to get on the ice for a while. To get back up to speeds, it’s not fun, but everybody has to do it.

King, on whether he was every out with an injury for that long as a younger player:
No, I’ve been fortunate. That was my first major injury, so hopefully the last. 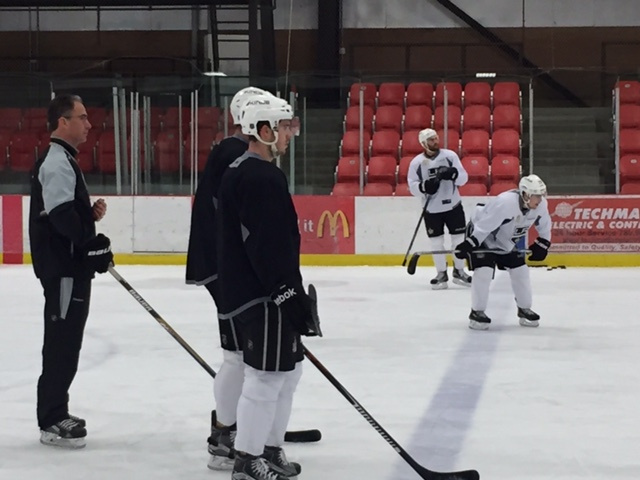