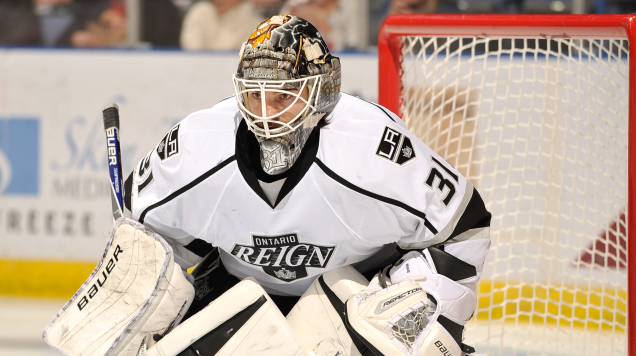 Reign game breakdown
Rookie Jonny Brodzinski scored two goals for his first multi-point game of the season and goaltender Peter Budaj stood on his head at times, stopping 39 shots, as the Reign (17-5-2-1) held off the cellar-dwelling Heat (9-14-0-2) by a 2-1 score on Tuesday night in Stockton. Brodzinski’s two goals came in the second period, the first assisted by Andrew Crescenzi and the other unassisted. Stockton got back into the game early in the third period on a wraparound goal by Bryce Van Brabant but Budaj was up to the test the rest of the way. It was also Ontario’s first game without defenseman Kurtis MacDermid, who was suspended 12 games earlier in the day for his hit last Saturday on the Gulls’ Matt Bailey.

Three stars
–Peter Budaj – Making his 11th straight start, the Reign’s backbone flirted with a shutout through 40-plus minutes until Van Brabant’s goal. This performance nearly mirrored his previous start in Stockton, a game in which he stopped all 38 shots he faced. On Tuesday, Budaj’s crease became a popular place to hang out as there were an onslaught of white jerseys in the blue paint after the whistle, particularly in the second period. At least twice he lost his mask, or took it off due to a fracas. But Budaj, as he has all season, kept his cool as he picked up his AHL-leading 16th win and padded his GAA to now 1.54.
–Jonny Brodzinski – It looks like the rookie is certainly turning a corner and gaining confidence and steam. The St. Cloud State product scored his first goal of the game off his own rebound at 9:55 of the second period to finally break the 0-0 tie. Brodzinski added his second (perhaps the better of the two) as he made a smart read in swooping in on the lane in which Stockton goalie Joni Ortio thought he had behind the net and intercepted Ortio’s pass attempt. From there, Brodzinski easily skated to the front of the net to score into the empty goal. These were Brodzinski’s third and fourth goals of the season.
–Zach Leslie – With MacDermid out of the lineup, enter Leslie, the seldom-used blueliner who before Tuesday had dressed in just five games this season. A sixth-round pick by the Kings in 2013, the 21-year-old Leslie will now be heavily relied upon in MacDermid’s absence and was paired with team captain Vincent LoVerde. Leslie finished with five shots on goal, the most of any defenseman on the ice and even had a high-quality chance on a 2-on-1 with Sean Backman in which he nearly buried Backman’s rebound in the second period.

Turning point
The Heat got their wheels in motion by finally beating Budaj early in the third, at the 2:16 mark on Van Brabant’s wraparound. It was likely a goal that Budaj would want back, as he couldn’t get his pad over in time before the puck slid in near side. After the Heat cut the Reign’s lead in half, the rest the period Ontario was hanging on and had to kill two penalties as well. With Ortio pulled out of the net late, Stockton applied solid pressure, but Budaj made one last stop before the horn blew.

Stat fact
–44 – Shots on goal for the Reign, their most this season in a game that ended in regulation. They had a season-high 45 in a 1-0 overtime victory over Manitoba way back on Oct. 17.

This and that off-ice
Michael Mersch scored his first NHL goal in his 9th game with the Kings, a wraparound jam in the second period of Tuesday’s 5-2 win over the Oilers. Mersch’s 12 goals remain a team high for the Reign even though they’ve now played six games without the left winger. He had some wonderful postgame quotes about his goal, read them here from LA Kings Insider Jon Rosen.

Here’s a video of Mersch’s goal. If you’ve been following the Reign this season, it will be a familiar sight:

Next up
Ontario will play its second of four games in six days when they play host to this same Stockton team on New Year’s Eve at 7 p.m.