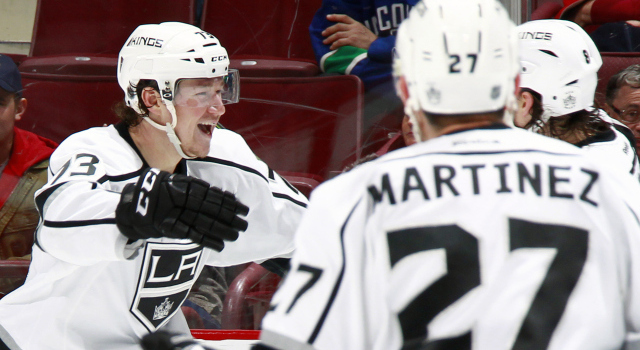 Derek Forbort, on his read on the play that led to his first NHL goal:
I just kind of got a weird puck off the end-boards and I just wanted to get it down to the net. I think somehow it went in. I think the puck had eyes, but it felt good.

Forbort, on whether he had a sense it was his goal when the puck went in the net:
I didn’t know. At first, I thought it got tipped but then Brownie told me it was mine. But I feel like even if he did tip it, he wouldn’t tell me that. So, [he’s] a good guy like that. [Reporter: It looked like he went over to the officials to let them know, too], Yeah, a good captain like that.

Forbort, on what stood out about the team’s performance:
I think it was just a complete game by the guys. I mean all throughout all facets of the game, the boys were on their toes tonight and kind of clicking on all cylinders. So it was a good one.

Forbort, on whether he has received any congratulatory text messages:
I haven’t even checked my phone. I’ve just been stretching, just trying to recover and get ready for tomorrow.

Tyler Toffoli, on whether there was an emphasis on him and Anze Kopitar to step up with Jeff Carter out:
Yeah, we had a good game but I think it all started with Nabber first shift and we followed. Quickie made some huge saves and kind of kept them out of it.

Toffoli, on how much they fed off of the early emotion in the game:
The first little bit, that’s what hockey is about. Especially a division game, we’re both fighting for a playoff spot really. So it was a really good game and I thought we played really well.

Toffoli, on whether they need goals from the defensemen to be successful:
We need everybody to be scoring. That’s what we take pride in as a team, for everybody to contribute and all find a way to score goals or make plays and just get us some momentum. Forbs and Nabber – just great shots from the point, getting them through and big goals for us.

Toffoli, on whether he was thinking about the top corner of the net on his first goal:
Close my eyes and shoot and shoot as hard as I can.

Toffoli, on how important it is to extend their lead in the Pacific Division:
It’s huge. We haven’t done a great job so far with teams in our division and I think we kind of threw some games away. But winning in Arizona, winning tonight, we’re just trying to send a message that we’re the best team in the division and we’re going to take pride in being the best.

Toffoli, on whether he’s excited about Derek Forbort’s first NHL goal:
Yeah, now we need some other guys to score.