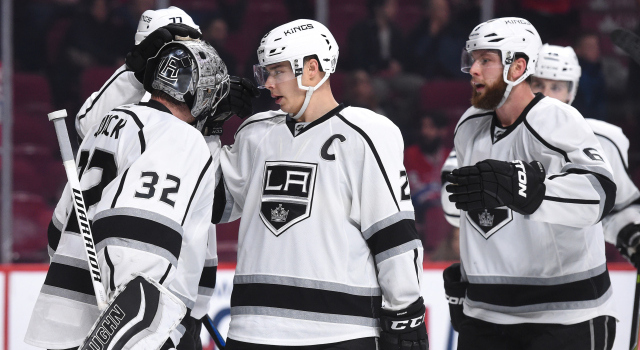 The Los Angeles Kings have built a small empire out of tight-checking, responsible and defensive-minded hockey backed by strong goaltending and a heavy possession game, so by allowing five goals in three of their last four games, several thoughts had festered when the team reconvened and met with the media in advance of tonight’s game against the Arizona Coyotes at Gila River Arena (6:00 p.m. PT / FOX Sports West / KABC 790 / I Heart Radio).

“The bottom line is we should’ve won that last game we had right before the break, and we kind of let two points just piss away to a division team which makes it even more sour in your mouth, so coming into tonight, another division game, we know we’ve got to win,” Drew Doughty said. “They beat us at home one time pretty easily, which we weren’t happy about, and we definitely remember that, and we know that they’ve got some really good, skilled offensive guys now that can put pucks into the net, so defense will be a big key to success.”

And that leads to one of today’s questions: Without the benefit of straightening out the kinks via video, or practice, or simply by being together as a team this past week, how does L.A. avoid the defensive challenges that arose in the recent 1-3-1 stretch?

“I think a lot of times defense doesn’t really come down to necessarily watching video or practice or anything like that,” Doughty said. “A lot of times playing good defense comes down to just determination and the will to not allow that puck to go in your net. I don’t think anyone on our team has necessarily dropped in that category, but I definitely think that we can give a lot more. We’ve got to want to shut teams out every single night. We want zero goals on the board every single time because that’s how you win games in this league is playing good defense and then getting two or three goals a night. We weren’t happy with that many goals, obviously, and we’ve really got to fix it.”

Darryl Sutter doesn’t mind opening up on the road and traveling the day of the game after the Christmas break, “because that’s when you have to count on everybody, and you need to play a simple, straight ahead game,” he said. “You’re not going to surprise anybody X and O’s wise, or anything like that, especially when you play teams so much.”

Tonight that team will be the Coyotes, who have held serve on home ice in recent years. Arizona has won five of the last six games at Gila River Arena between the two clubs, and Jonathan Quick hasn’t won a game in Arizona since January 26, 2013.

“Good defensive play for us lately starts with our goalies and works out,” Sutter said this morning. Despite a combined nine goals against sandwiched around a shutout in Montreal, Jonathan Quick, who is expected to draw the start, will look to further his strong play that has been reflected in the club’s .920 team save percentage, which ranks fifth in the league.

“We had a good morning skate today, so it’s good to kind of get the rust out,” Brayden McNabb said. “But the three days were good for us, good for everyone to get their rest. So this is a big division game for us, and we’re going to take it as a must-win.”

Drew Doughty, on whether speed and skill separate Arizona from previous Coyotes teams:
I think that would probably be the biggest difference. These young guys are obviously playing well for them, there’s no secret to that. They’re all highly skilled offensive players, so I guess the advantage you could take out of that is that maybe in their D zone they aren’t as good as maybe some of the veteran guys, or maybe don’t care to play as hard defensively as some of the veteran guys, so we know we have to shut them down offensively, and then defensively take advantage of them there.

Brayden McNabb, on how today’s travel affects preparation:
It’s a little different, you’re kind of out of your routine a bit flying on the day of the game and getting up a bit earlier, but we’re all pros and we’re just going to have to deal with it, you know, we can’t do anything about it.

McNabb, on whether Los Angeles takes Arizona’s two Staples Center wins personally:
Yeah, for sure, you know they came into our rink twice and outplayed us both games, so we definitely owe them, and like I said before, this is a big division game for us and we have to be ready to go.