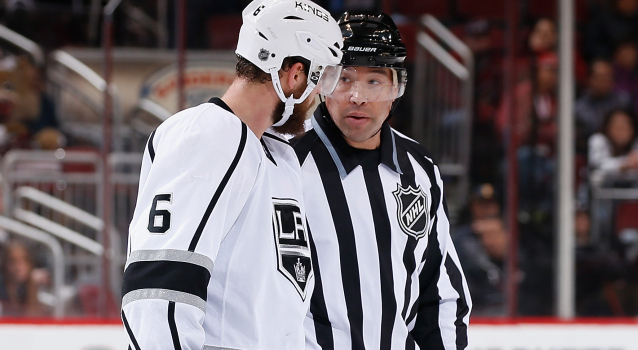 At 13:20 of the third period of Los Angeles’ 4-3 overtime win over the Arizona Coyotes, Jake Muzzin was assessed a match penalty following a violent collision with Boyd Gordon in which the Coyote center’s head frighteningly whipped back after heavy contact from the defenseman’s backside.

Match penalties are assessed to “any player who deliberately attempts to injure or who deliberately injures an opponent in any manner,” and the offending player is suspended, pending a league review. It results in the immediate ejection from the game of the violating player, who is also charged with 10 total penalty minutes, while the team is shorthanded for a total of five minutes.

Arizona scored twice on the power play to tie the game at three, with one goal coming during a five-on-three advantage after Alec Martinez’s delay of game minor.

Along with Milan Lucic’s forearm shot to Logan Couture on opening night, Saturday’s play marked the second time this season a King has been given a match penalty. Lucic was never suspended following a review of the incident, and according to Darryl Sutter – who also disagreed with the assessment of Lucic’s match penalty – Saturday’s incident could very well result in a similar conclusion.

“It was a hockey play,” Sutter said. “It’s not even a penalty. [The referees] had their arms up the whole night. It was all penalties. All special teams.”

The Kings learned of the league’s decision not to hand down supplemental discipline to Lucic early in the day after the season opener.

Tippett hadn't talked to trainers before he addressed media, so he didn't have much of an update on Gordon. "It looked pretty nasty."

Asked if Gordon would stay behind and not travel to Colorado, Tippett said, "I don't know. We'll see."

After the game, Muzzin said that there was no intent to make contact with Gordon’s head and that he had tried to keep the puck in while his opponent “went down low.”

“Whatever they’ve got to do, they’ve got to do,” Muzzin said of potentially facing supplemental discipline. “But I didn’t intentionally go and hit him in the head. I think you can see it, but I didn’t know, obviously, that he was going to drop and take a knee like that.”