Mersch back with Kings, who benefited from cap savings 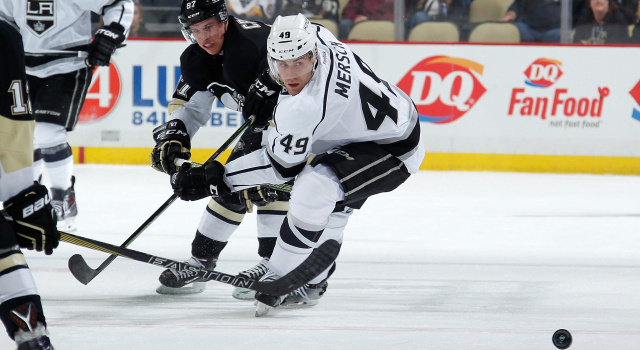 Do you remember last season when the Kings weren’t able to recall a player because taking on a league-minimum salary would have put them $160 over the salary cap? Every penny counts, as evidenced by Michael Mersch’s three-day assignment to AHL-Ontario.

Mersch, who was recalled by the Kings this morning, did not report to Ontario during the assignment and actually traveled back to the Midwest to be with family over the short break.

“I was going home for Christmas, and my mindset was kind of ‘whatever happens, happens,'” he said. “I’m going to enjoy the time with my family, but it was nice to be able to take that time, take your mind off of hockey for a few hours.”

The 23-year-old said that he communicated with the team’s hockey operations via text message “just to see what the plan was” and identify whether he’d be taking an early mornig bus to San Diego or a flight to Phoenix. After communicating, he knew he’d be bound for Arizona at the outset of a four-game trip that will also bring the club through Vancouver, Edmonton and Calgary.

“I just wanted to know, whatever it was, make sure I was all set,” he said. “I just play hockey.”

During today’s morning skate, he was slotted to the left of Andy Andreoff and Jordan Nolan. Perhaps if there’s an opportunity for the forward with an impressive net presence to earn a gift on Boxing Day, it could come in the form of his first career NHL point. Through six games, Mersch has been held scoreless.

In any event, the trip home allowed for the rookie to catch a rare breather amid a heavy schedule.

“It was fun to be able to go home and talk to some people who were able to watch the games and experience the whole thing with me, he said. “It was exciting, and mom was really happy, and just everybody in general. To go home for a bit and talk about it with friends and family, it was cool.

Based on financials provided by General Fanager, Los Angeles currently has $3.16-million of cap space available and 22 players on its active roster.