Carter injured in OT win, will not travel to Vancouver 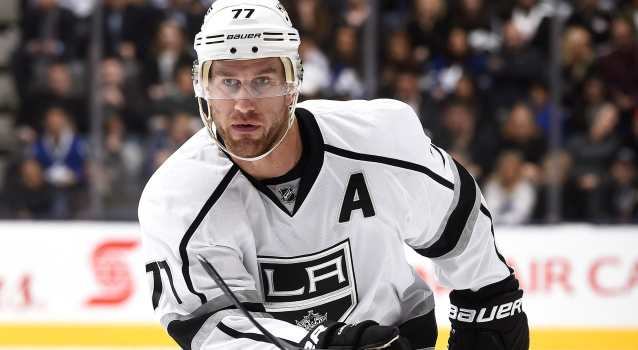 Though information on injuries immediately following games may be vague, the original indication of the severity of the injury suffered by Jeff Carter early in Los Angeles’ 4-3 overtime win over Arizona on Saturday won’t go far towards alleviating Kings’ fans concerns. According to a hockey operations executive, Carter won’t remain with the club on the road trip and will instead return to Los Angeles, presumably to have his injury identified and treated.

A team spokesperson informed the media in the second period that Carter had suffered an “upper-body” injury and was not expected to return, but beyond that update, and the information provided by a hockey operations executive, details were scarce and Darryl Sutter declined to provide any injury information during post-game media availability.

Carter played only two shifts in the win, while a highlight shown by FOX Sports West during the Kings Live post-game show appeared to show Carter getting tangled up with an Arizona forward off the game’s opening faceoff. He ultimately logged 48 seconds and took two faceoffs.

“We were down a forward right away, they were playing with 11 forwards, so nobody could bitch much about ice time,” Darryl Sutter said after the game.

The Kings are scheduled to practice in Glendale, Arizona on Sunday before flying to Vancouver. The trip continues with games against the Canucks (Monday, 12/28), Oilers (Tuesday, 12/29) and Flames (Thursday, 12/31).