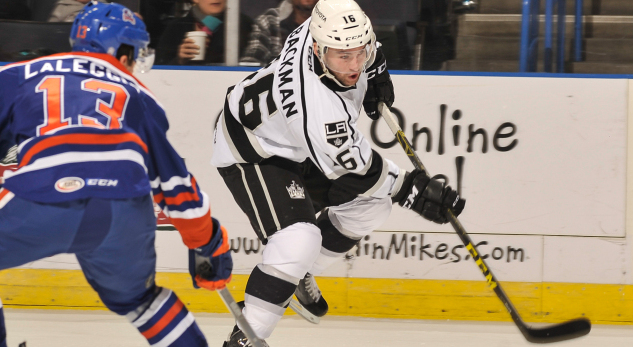 Reign game breakdown
Sean Backman scored 21 seconds into overtime and the Reign (16-4-2-1) rallied to defeat the visiting Bakersfield Condors (11-11-2-1) in a 2-1 game that was all about the penalties, until it finally wasn’t. The penalty box was revolving door in the Reign’s exit to their holiday break and the game lacked flow, particularly in a second period that featured 10 minor penalties. Joel Lowry scored his first pro goal just over five minutes into the final frame to tie the score at 1. Matt Ford’s power play goal from the second period for the Condors had stood alone until then. Peter Budaj picked up his 15th win in net, making 19 saves.

Best quote
Reign head coach Mike Stothers, playing it safe when talking about the officiating: There’s a little holiday going on around here, I could use a few extra bucks here, I’ve got my daughter here and everything else. I’m not going to give money to the league.

Three stars
–Sean Backman – The veteran and Reign’s point leader (20 points: 6 goals, 14 assists) took Stothers’ words to heart. A night after the team had zero shots in OT, Stothers instructed his team to shoot and Backman did on his very first opportunity in the extra frame, a blast from the right circle that beat Condors goalie Ben Scrivens high just 21 seconds into overtime.

–Joel Lowry – The Cornell alum and first-year pro scored his first of the season in his 7th game. Lowry, who’s been in and out of the lineup all season and was even sent to Manchester earlier this month, made his mark in finishing off a slick pass from defenseman Nick Ebert. As Ebert drove the right side and wound up behind the Condors’ net, he fired a pass to a driving Lowry who had a wide-open net to work with.

–Nic Dowd – The centerman had a rough game the night prior and was visibly upset after Saturday’s shootout loss to the Gulls. On Sunday, he rebounded and played heavy PK minutes for a Reign team that killed 10 out of 11 of the Condors’ opportunities.

Turning point
–All the players and the officials needed was a little time apart. The third period was a breath of fresh air as the officials pocketed their whistles and the game finally featured some 5-on-5 play and as the flow developed Lowry netted the equalizer.

Stat fact
–16 – Minor penalties taken in the game from both sides. The Reign kicked off the penalty party by taking three in the first 10 minutes alone, setting the pace for a drawn-out second period that featured 10 minors.

This and that off-ice
After the game many Ontario players were in rush to get to the airport and even Ebert wasn’t available to chat with media as he fled the arena to make a flight for the holidays.

Next up
The Reign will have Monday through Friday off next week for a holiday break and resume action (practice or game) next Saturday when they travel to play the San Diego Gulls at 7:05 p.m.