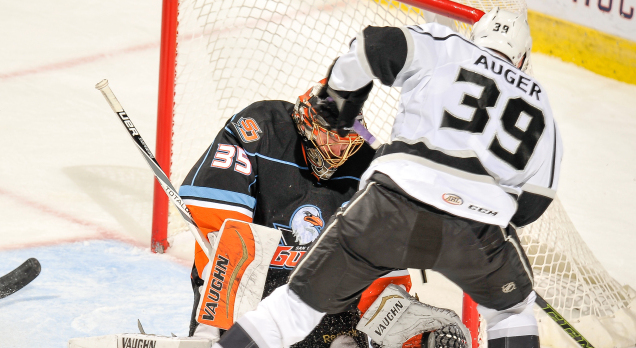 Stothers, on the slower start:
We got a point.

Stothers, on Anton Khudobin’s play in net for the Gulls:
He was good. He was very good.

Stothers, on the Sean Backman, Valentin Zykov, Kris Newbury line:
They were our best line tonight.

Stothers, on goalie Peter Budaj’s play:
Buds has provided us with goaltending that’s always given us a chance to win and tonight was no different. You’ve got to find a way to get more pucks behind their goalie. He can’t stop ’em and score ’em.

Stothers, on others needing to step up in absence of Mersch and Kempe:
Absolutely. Everybody says they want more ice time. Everybody tells me that they can play. Sure they tell you how good they are. When the puck drops, prove it. It’s a great opportunity for all of them. It’s a wide-open opportunity for everybody, but again, you’ve got to remember we’ve got some young guys that are just getting their feet wet. It’s going to take some time. People don’t just step in. Look at what’s going on up top (with the Kings). Shorsey’s still not filling the net like he did down here. Wealer, Forbort, it takes time. Merschy. It takes time. Whatever level you go up, there’s a growth period and our guys are no different. I’m happy with where they’re at, you know what, and I feel quite confident that in time they’re going to be the hockey players that we’re all expecting them to be.

Stothers, on the message going into tomorrow:
Get ready for tomorrow. We got a valuable point tonight. Win tomorrow, we get 3 out of 4 in a weekend. That’s not a bad weekend.

Nic Dowd, on his turnovers in the second period:
First one I just lost it and tried to kick it up, maybe just skipped on me, I don’t know. Second one was just, I guess lackadaisical, went to turn back and play it over to Schultz and it tipped off my stick. The guy made a good play and they scored.

Dowd, on faceoff win that led to Newbury goal:
I was the beginning of it but what the boys did all the way up to get the goal I think was probably looked at a little more closely. Made a lot of good plays and Newbs really smart banking it off the goalie.

Dowd, on taking more of a leadership role this season:
I was excited to be able to wear a letter this year. In my second year I definitely know it’s a privilege. I know that it’s good to have guys like Sean and Vinny and Jeff and Newbs and Biss and those guys up there to look up to and see how it’s done and stuff like that.

Paul Bissonnette, on whether or not he was surprised there were no fights:
No. I asked McGrattan (to fight) when they were up 1-0. They had momentum and he said no. It was a chippy game. On their back end they only have five guys too. They probably just wanted to keep everyone on the ice. Every game’s got a different approach and that was probably theirs tonight.

Kevin Gravel, on the loss:
It’s good to get a point I guess, but we didn’t come out very well. Tough first period for us. Buds really held us in it there. I thought we came out a little better after that Teddy Bear toss intermission. First 6 or 7 minutes of that I thought we were good and then we kind of went back into a little lull there. Third period I guess we were kind of playing a little bit of desperate hockey and it came down to the last minute again, we found a way to pop one in there and hoping to get that second point in overtime but one point’s better than none I guess.

Gravel, on why slow starts happen:
I think it’s just being ready to go. I don’t think it’s anything specific, whether it’s guys’ pregame routines or whatever it is. The onus is on us as players to be ready when that puck drops and tonight we weren’t and probably the only guy that was was Buds and he got us a point tonight.

Gravel, on the last time they played the Gulls:
I think the most frustrating thing is that we didn’t come out ready to go. Last two times we played these guys they took it to us pretty good. That was back-to-back nights. They swept the weekend on us. For us not to be ready to go in that first period kind of hurts us a little bit. It’s another day tomorrow. Another opportunity for us to get a win and feel good going into break.

Peter Budaj, on the shootout, a first for the Reign this season:
You can’t really do much scouting report on it, you never know what the guys’ going to do so I think that kind of keeps the advantage equal. I didn’t see those guys do those moves and they made some nice moves. The third one I think I kind of got there too early, put it five hole, I don’t think he wanted to shoot it there but he didn’t see anything else open. Nice move. What can you do? It’s a shootout.

Budaj, on his play early on that kept the Reign in the game:
I felt good. I think I was seeing the puck pretty well even though on the power play we tried to keep the shots to the outside and I was able to make some saves. They always play well against us for some reason. No offense to their team, I think they have a good team, but when you look at their record for some reason they always play well against us and they played well against us tonight too. They get pumped up for their games against us. They’re always fun games and lots of emotions, lots of hard work and fun for the fans. Bottom line, we’ve got to find a way to beat these teams and we’ve got to find a way to start winning against this team.

Budaj, on the goals in back-to-back games when he was pulled:
I think it just shows that we never give up. We always believe in ourselves. We believe whatever guys are out there can score a goal and we did what we were supposed to from the coaching part. We executed the plan like we like we wanted to. We wanted to put the pucks in the blue paint. He’s a good goalie and get the rebounds and capitalize on it. I think it was a good effort by our guys. They work hard and it’s a well-earned point. Too bad it wasn’t two points but it’s a well-earned point.

Budaj, on some of the bad bounces:
The first one was kind of a tough bounce off the backboards right to the guy standing in front. Those things are going to happen now and then. Obviously you don’t want it to happen but that’s part of hockey. The second goal too, I think I had two or three saves in front and then the [puck] … to the guy on the left side and he made nice shot afterwards. Sometimes those bounces go in. They hit the post too. We had some chances. It kind of evens out at the end.

Kris Newbury, on what he said to McGrattan after his late goal:
I’m not going to say out loud. Probably wouldn’t be able to say it to the media, but we don’t like each other. I don’t like anyone on that team, so just leave it at that.

Newbury, on playing with Backman since his return:
I’m just starting to feel back in the rhythm. I know it took me a couple games. I was bobbling pucks in Charlotte and last week at home. A guy like that, you’ve got to utilize his speed so whenever I get the puck my first option is always to see where he is, and if he’s got a step on someone I’m trying to get him the puck. Me, myself, I’m just trying to work the front of the net. Get some greasy goals or attempt to and just work hard.

Newbury, on the overall feel of the loss:
It’s disappointing. We did a good job tonight but obviously at the end of the day you want the two points. That’s a team that we play a lot. We’ve got to find ways to beat them. So far they’ve got our number and we have to find a way around that.

Newbury, on playing with new linemate Valentin Zykov:
He’s a young guy. He’s got a lot of talent obviously so we’ve got to utilize him as well. Whenever he’s got the puck he’s looking to shoot so guys like me get in front of the net and hopefully good things will happen.

Justin Auger, on if the loss leaves a sour taste after having battled back:
Of course. We obviously want to win every game. We’re happy we got that one late there to push it to overtime to get the one point. But we go into every game looking for two points.

Auger, on wishing they had another shot vs. Gulls like last time on back-to-back:
Yeah, obviously. I think we play these guys 12 or 14 times or something this year so we’re going to get our chances back at them.

Auger, on if it was surprising that there were no fights:
Both teams like to play hard and sometimes there’s fights and sometimes there’s not. The ref was calling a tight game and I thought he did a good job in keeping it under control and both teams were playing hard. That’s what it came down to, the hard play and no one wanted to be shorthanded and no one wanted to lose a forward for that time and be off the ice for five minutes.