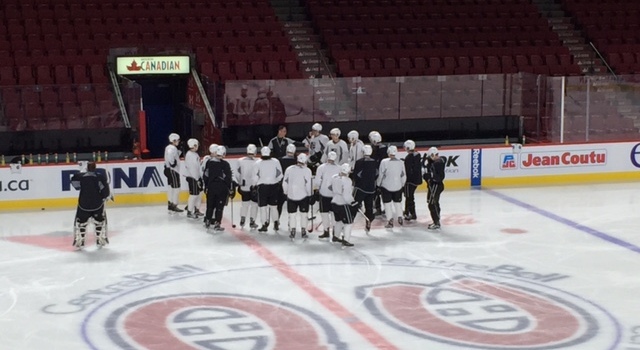 Good afternoon from rainy Montreal, where the temperature has risen as the drops have fallen. The Kings skated at Bell Centre earlier today as the Canadiens skated at their team facility in Brossard. Like Los Angeles, Montreal is one of the few teams in the league that does not hold morning skates at its home rink.

-Jeff Carter is “OK,” according to Darryl Sutter. We’ve been through this drill before, Insiders. Carter doesn’t always participate in morning skates. Based on the understanding that a scratched player will often stand in for Carter when he doesn’t take part in morning skates (and that Lewis is still technically on injured reserve), it would appear as though Carter will center Michael Mersch and Tyler Toffoli. Milan Lucic was back up top alongside Anze Kopitar and Marian Gaborik, where he began the year, which dropped Tanner Pearson alongside Nick Shore and Dustin Brown. Derek Forbort appears to be the odd-man out on the back end. We’ll keep tabs on the Kings’ lines during rushes in warm-ups. Jamie McBain will be my pre-game bench interview on FOX Sports West.

-Milan Lucic drew a heavy share of attention before the game, as one would imagine.

A few people in #Montreal wanted to chat with @MilanLucicCFC17 today. No idea why. @LAKings Live 4pm @FoxSportsWest! pic.twitter.com/o182LtU0jS

I’ll have stories up on Lucic, Lewis, and the team’s trip to Tremblant prior to the game preview.

-As for the Canadiens, Mike Condon is expected to get the nod in net after Dustin Tokarski drew the start against San Jose two nights ago and didn’t make it through the second period. Montreal is expected to line up with Pacioretty-Plekanec-Byron, Eller-Galchenyuk-Andrighetto, Fleischmann-Desharnais-Weise and Carr-Mitchell-Flynn with a defense of Beaulieu-Subban, Emelin-Petry and Markov-Gilbert. Carey Price (lower-body), Brendan Gallagher (hand) and Devante Smith-Pelly (lower-body) are out.

Said defenseman Nathan Beaulieu of Drew Doughty, (via the Canadiens’ website), “He’s probably the best all-around defenseman in the league. He’s very sneaky and he’ll kill you in both zones. They actually have one of the best defensive groups in the league. They do everything so well and they’re mobile. He’s definitely a solid guy, and we’ll have to pay special attention to him tonight.” 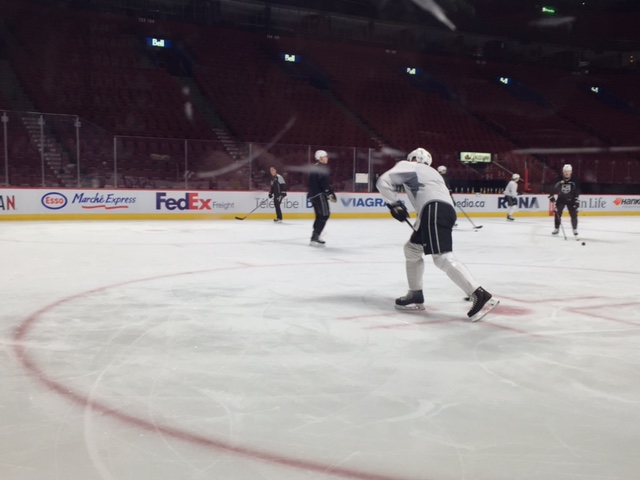