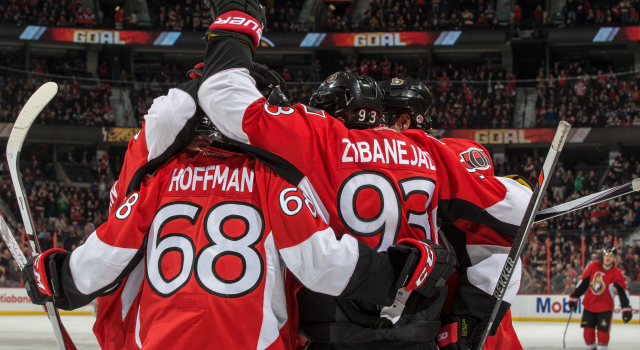 There was a strange turn of events in Los Angeles’ 5-3 loss in Ottawa on Monday night. The Kings played a terrific road first period and established the lead on a right circle cannon from Jamie McBain inside the far post after Jeff Carter ably hit him in stride on an impressive neutral zone pass. (McBain, to his credit, was among the team’s best players in the first and also made several impressive defensive zone plays to cool down Senators opportunities.) After hemming Ottawa in their zone through the first two shifts of the second period, the entire momentum of the game turned 180 degrees. Mika Zibanejad found Mike Hoffman with some space in front of the net, and his quick release off the pass tied the game at one. After Jordan Nolan trucked Chris Neil two shifts later, all hell broke loose as the Senators consistently were able to generate quality scoring opportunities from the center of the ice with clean zone entries and impressive offensive zone puck movement. Erik Karlsson worked the puck deep and found Kyle Turris. Bang. Karlsson floated a puck towards the front of the net that deflected off bodies and trickled past Quick. Light bang. Hoffman entered the offensive zone with options and emphatically finished off a give-and-go with Curtis Lazar. Bang. When the nuclear fallout had settled after 40 minutes, Los Angeles trailed 4-1, and dozens of Ottawa fans, reporters and bloggers had either retweeted me or discounted the notion of an East Coast bias in awards voting while calling to attention a tweet I posted in which Milan Lucic said of Drew Doughty, “He could easily be a Norris Trophy winner right now if he wasn’t playing at 10:30 most nights in the Eastern Time Zone.” My @’s midway through the second period would’ve given you the angries, Insiders.

We weren’t expecting the Kings to utilize seven defensemen, but with a top-heavy and bottom-light performance in Buffalo in which the Kings were carried by the Kopitar and Carter lines while the Shore and Weal lines withered, the choice was to replace Jordan Weal with Derek Forbort was understandable. The result was that Forbort played a total of six shifts in 3:53 of ice time and was on the ice for Kyle Turris’ goal. And that’s not to say the result would have been different had Weal played, but that the Kings’ depth at the moment is a concern with Dwight King, Kyle Clifford, Trevor Lewis and Matt Greene all unavailable. While there have been moments of quality play from Nick Shore and Dustin Brown (and the reliably sturdy minutes from Clifford, when he was healthy), right now the team’s depth is dealing with bouts of inconsistency that is partially personnel-based. It’s challenging to be worn down both by injuries and travel-based three-in-four weariness, which was apparent on Monday.

The Kings are currently in Mont Tremblant, Quebec (I really wanted to ask Darryl Sutter if he gave the team his no skiing rule, but the timing wouldn’t have been right after last night’s game), and with a day off today and a practice on the docket for Wednesday, the opportunity will be there for the team to reset, recoup and get its legs back for the toughest game on the trip on Thursday night. The team has actually played well in Montreal recently – another house of terror historically – and after winning 6-0 at the Bell Centre two Decembers ago, the Kings’ performance in a 6-2 defeat was much better than what the score indicated (with discounted score-effects, given that L.A. was thoroughly aggressive and able to generate high-quality opportunities denied by Carey Price from the get-go). As they did after a pair of defeats on the previous road trip – they’ve lost at least two games in a row only three times this season – it will be interesting to see how the team responds Thursday night.