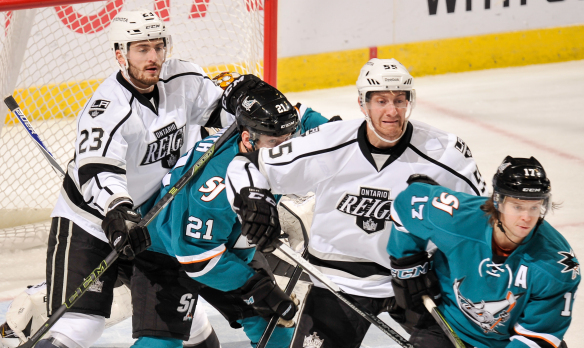 Reign game breakdown
Kevin Gravel scored 1:16 into overtime as the Reign came from behind to beat the visiting San Jose Barracuda 2-1 after managing to tie score with just over a minute left in regulation. Justin Auger tipped a Sean Backman shot with 1:09 left in the game to finally put the Reign on the board in a game where they hung around and hung around. The Reign didn’t execute well, but they didn’t let the game slip away either and the result was another two points. Peter Budaj stopped 19 of 20 shots to pick up his 14th victory.

Best quote
Gravel, on his OT winner: “I don’t how it went in. I didn’t even know it went in. I rounded the net and saw the puck in the back of the net. I’ll take that every day though.”

Three stars
–Kevin Gravel – The defenseman’s overtime winner exemplified what’s been a strong characteristic of the Reign all season, the resiliency to work when things aren’t going their way and wait for the right moment. Gravel worked with the little space he had coming down the left side and beat Barracuda goalie Aaron Dell through his pads. The same Dell who nearly picked up his first shutout of the season and was flawless until Auger’s goal.

–Peter Budaj – The Reign goaltender was solid and managed to keep his team in it in a game where things seemed lackluster at times. As the offensive lines shuffled in front of him Budaj was the constant force he has been all season. The one goal he did let in was off an impressive deflection with 31 seconds left in the first period by Trevor Parkes.

–Mike Stothers – The Reign head coach has managed to keep his group believing in times where frustration could easily creep into a team’s game. He played countless line combinations and kept his team on its toes as a result. Ontario has continually played with the mentality that if they stick to their process, something good is bound to happen and it did again on Sunday. Also, the Reign took just two minor penalties that weren’t fighting-related, so there’s progress on the discipline front as well.

Turning point
–Justin Auger’s goal with 1:09 left in regulation with Budaj at the bench for an extra attacker was a long time coming but it was all the Reign needed. In a game where the Reign couldn’t buy a goal and for the most part didn’t have any notable scoring chances, all it took was playing 6 on 5 to turn it all around. Auger tipped in a Sean Backman bullet from the right point to tie the score and give the Reign an opportunity for overtime.

Stat fact
–2:25 – The span of minutes in which the Reign scored in regulation and overtime, after being held off the board for the first 58:51 minutes of play.

This and that off-ice
Stothers confirmed after the game that forward Adrian Kempe will be leaving the team Monday to join Sweden at the World Junior Championships in Finland.

Next up
The Reign will have a recovery day on Monday, followed by four straight days of practice before hosting the San Diego Gulls on Saturday night at 6 p.m. On Wednesday and Thursday practices are scheduled as “development days,” as members of the Kings development staff will take over to work with the players.