In a traditionally unfriendly building, a familiar face 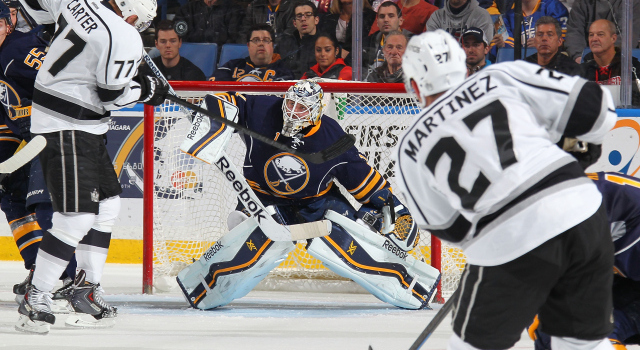 There are certain streaks and records in opposing buildings that are simply hard to explain. When Los Angeles plays in Montreal next week, it’ll be referenced that the Kings average roughly one win every 5.4 seasons in their French Canadian (er, Canadien) house of horrors. Ditto for several teams’ histories in Los Angeles, like Pittsburgh, Florida and Ottawa.

The First Niagara Center – and prior to that, the Memorial Auditorium – have not been kind to the Kings. Los Angeles is 1-11-1 with a tie in its last 14 visits to Buffalo, having been outscored 30-8 during a six-game road losing streak at the First Niagara Center. The one win over that 13-game span, which dates back to 1993-94, was a 4-1 victory on February 21, 2003, a game in which Ziggy Palffy and Brian Smolinski each scored twice.

When the Kings visited last season, Jhonas Enroth, who will start tonight for Los Angeles, posted a 34-save shutout in a 1-0 Sabres win.

If you were to ask Darryl Sutter about those types of streaks – having done so several years ago, I wouldn’t recommend it – he’d say they’re meaningless records as personnel and staffs evolve. Alec Martinez would be of that mindset as well.

“I think that there are certainly some buildings that are really tough to play in,” he said. “There’s a few that come to mind – being in Detroit, Calgary, things like that – that if you look at the stats over the years, we’ve had a hard time in. At the end of the day, it’s the same situation. It’s a hockey game. I guess I wouldn’t really read into it that much. Buffalo has had a good club the past however many years. Regardless, a road game is hard regardless of where you are.”

Tonight’s game has an interesting wrinkle as Los Angeles will face a Buffalo team which relies on former Kings coach Terry Murray as an assistant coach. Murray, who was fired four years ago to the day but is widely credited for installing the identity and defensive systems that have been accentuated during the team’s rise to success under Sutter, will counter the team for the first time since his tenure with the organization.

“Yeah, for sure he’s a big part of [the team’s recent success],” Martinez said. “When I broke into the league, he was the coach and he was really good for me and really good to me. You’re always appreciative of that coach that gives you the opportunity to play in the league. But it’s good to see him. Good to see him here.”

Alec Martinez, on how Los Angeles prepares to face Buffalo:
I think it’s important to look at personnel. Make sure that you’re familiar with guys that you don’t play against very often. They’ve got a couple new guys that we’ve never played against before. I think that’s important. I think you’ve got to have a good understanding of their system. I think the one thing that we do have going for us is that we’ve played some teams in the east as of late that have similar styles. I’d say that they have a similar style to Pittsburgh where they’ve got a lot of high-powered offense, a lot of D that can move the puck and they generate a lot of their chances off the rush. So I think we’ve got to do a good job of weathering that. As D-men, we’ve got to have tight gaps and as forwards too, getting that back pressure. It’s going to be a big focus for us.