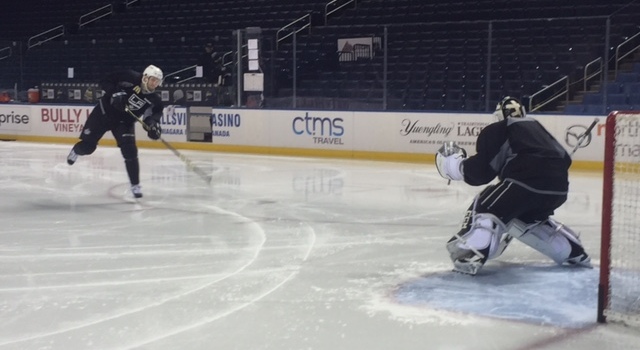 Hello once again from Buffalo, where the Kings will complete the second half of their back-to-back set versus the Sabres tonight at the First Niagara Center. As expected, a highly optional skate took place roughly 12 hours after the team departed Pittsburgh, and only Jhonas Enroth, Jamie McBain, Derek Forbort and Michael Mersch took the ice. That meant John Stevens and Davis Payne took a few shots on Enroth, who is expected to start tonight against his former club. Expect the Kings to ice the same lineup as the one against the Penguins.

Starting opposite Enroth will be fellow Swede Linus Ullmark, a sixth round pick in 2012 who is from the small municipality of Lugnvik, Sweden, located just outside of Kramfors, Adrian Kempe’s hometown. The two played together for Modo Hockey’s U-20 team in 2012-13 and Modo’s senior team from 2013-15. Ullmark also played with Mora IK in HockeyAllsvenskan in the 2012-13 season, though I can’t remember if his six games with the club that season occurred alongside Kopitar and Ryan, and Ervins Mustukovs was drawing the heavy majority of the starts while NHL players were overseas during the work stoppage. Ullmark, 22, was a sixth round pick in 2012 and is 4-6-2 with a 2.85 goals-against average and .909 save percentage with Buffalo this season.

Cody McCormick, Robin Lehner, Mark Pysyk and Tyler Ennis remain out for the Sabres, who have lost 138 man-games to injury thus far. They’re expected to ice the following forward group:

At the morning skate, reporters caught up with Enroth, who is one of four ex-Sabres (also: Brayden McNabb, Jamie McBain and Christian Ehrhoff) to return to Buffalo tonight.

Jhonas Enroth, on returning to Buffalo as an opponent:
It was definitely a bit different obviously, since I spent some time here. But I’m excited for the game and looking forward to it a lot. So it should be a good one.

Enroth, on whether it’s fun to return to Buffalo:
Oh yeah, definitely. I think everyone knows that I love Buffalo. So it’s nice to come back and it still felt like I was coming home in a way. But yeah, it was nice to come back.

Enroth, on whether it’s disappointing to be in Buffalo on tail end of a back-to-back:
Yeah, definitely, but that’s how it is and we’re here to play a hockey game and I obviously get that. I’m just going to try to stay professional, get ready for my game here. I haven’t played in a while, so I’m pretty excited about that, too.

Enroth, on playing with Jonathan Quick:
Well, I think I was in kind of a similar position with Miller here. I think I played a couple more games back then, but it’s a situation I can say I am pretty used to it. But I’m just trying to stay sharp in practice and just being sharp whenever I get the nod. Like I said, I feel like I know what I need to do now. I’m a couple years older and so far, I‘ve been playing pretty well when I got my chances. So I’m just trying to look for more games.

Enroth, on moving from Buffalo to Los Angeles:
It’s a big difference. Obviously LA is a really cool place to live in and it’s a lot of things to do there. So it’s a cool place to live, and I’m definitely happy to get that experience to live there in a cool city like that.

Enroth, on Buffalo having a very different roster from his time on the team:
Yeah, I know. I’ve seen their roster and it’s a whole lot of new guys, especially the top two lines. I haven’t played with any of those guys. I think Gionta is the only one and Reinhart. There’s a lot of new players and new trainers too, I’ve heard. But I think the Sabres are really starting to come around and they’re a pretty young and talented team now. So it should be exciting to follow the team.

Enroth, on whether former Sabres helped his transition to Los Angeles:
I think so. I think we’re four guys, right? So I knew those guys when I first got here or got to LA. So it was definitely nice to know a couple guys around the team and it’s been a pretty smooth transition for me. I think I really like the team we have and it’s a good group of guys.

Enroth, on how Brayden McNabb has evolved from his time in Buffalo:
First of all, he was a really good player when he played here with the Sabres, too. I knew coming into the season that he’s going to be a really good defender. A guy you like to have in front of you as a goalie. He’s a big body and plays the game very tough and you can count on him every night. I knew he was a good player.

Enroth, on his fondest memory of being in Buffalo:
Honestly, I think it’s my last season here last year. It’s a season I’m very proud of and looking back at it, I kind of smile when I think about it. It was a tough season for us, but I got to play a lot of games and I felt good throughout that year and it was a good experience. I think that’s probably the biggest experience or biggest memory from my Sabres time here. Obviously, my first couple games here, too, my first year when I broke into the league. 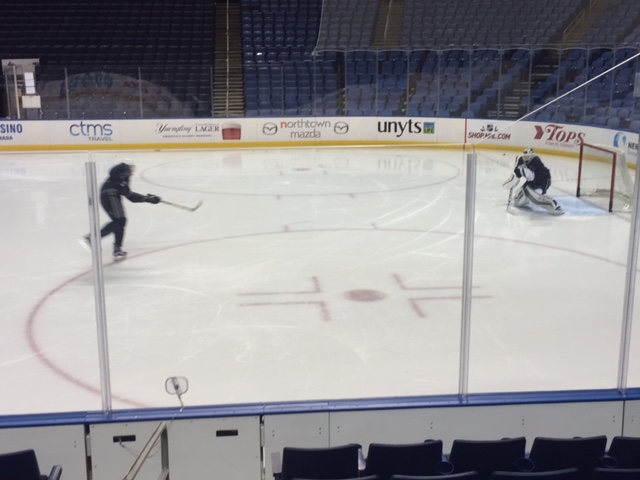