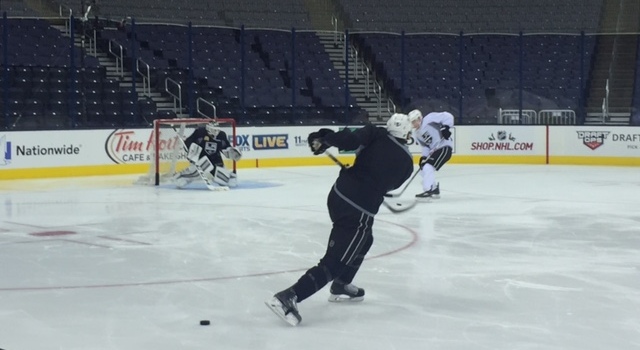 Good afternoon from the team charter, which is taxiing prior to taking off for a quick flight across state lines to Pittsburgh. There wasn’t much to report from today’s practice at Nationwide Arena, in which four players (Enroth, McBain, Forbort, Weal) and five coaches / staff members (Sutter, Stevens, Payne, Ranford, Fink) took the ice. Needless to say, this wasn’t a systems-implementing practice, but rather a skate to get a good sweat on 14 hours after the conclusion of Tuesday’s overtime win. The rest of the team worked out, kicked a soccer ball around, rode bikes and (if necessary) received some treatment in advance of the flight.

I did get the sense in speaking with hockey operations that Dwight King is nearing the cusp of getting back into light skating, and that the hope – not the expectation, but the hope – is that he’ll be able to practice in a limited capacity with the team when it arrives back home after the trip.

Michael Mersch, whose recall has not yet been officially announced, is expected to join the team in Pittsburgh. I was told by a member of the team’s equipment staff that he’ll continue to wear #49.

“He’s a call-up player. See if he can contribute. Wait and see,” Darryl Sutter said of Mersch. “I’m waiting to see on Trevor, and waiting to see if we’re better with 11 and seven. I’m not putting too much into it. He had a good camp, everybody knows that. He’s had good numbers in the American League to start the year. That’s it. Base it on shift-to-shift performance.”

In six preseason games, Mersch scored twice and registered a plus-one rating while leading the team with 20 shots on goal in six games. In 19 games with Ontario this season, he totaled 12 goals, 15 points and 93 shots on goal.

“Very, very dangerous around the net at all times,” Anze Kopitar said of his impressions of Mersch from training camp. “He definitely knows how to score, because he’s done it. I don’t think I’ve seen enough of the action to maybe assess [his game] a little bit more, but I know he’s very good around the net, and it’s certainly a thing we need.”

We’ll have a better understanding of the role the rookie will play and who he’ll skate with when the team practices Thursday in Pittsburgh.