Clifford injured, returns to LA; Mersch to be called up 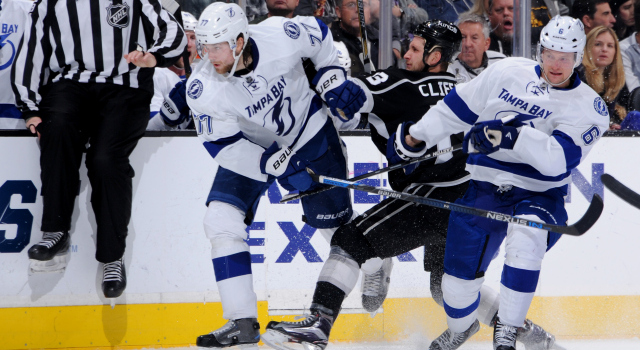 Kyle Clifford suffered an upper-body injury during the Kings’ home stand finale on Sunday and did not play in Tuesday’s 3-2 overtime win in Columbus, the first game of a six-game road trip. Darryl Sutter acknowledged that Clifford was following “protocol” and that the left wing had left the team following the morning skate.

The injury occurred when Victor Hedman elbowed Clifford in the face during Los Angeles’ win over Tampa Bay on Sunday, a play that resulted in a two-minute elbowing minor. Though Clifford remained in the game and traveled east with the team on Monday, he felt poor late in Monday’s morning skate and apparently attempted to play through his discomfort.

“That’s the thing with Cliffy though, right? He’s like the guy on Monty Python. He’s got a broken leg, he’d still go out there,” General Manager Dean Lombardi said. “But I was telling him, ‘you’ve just got to tell us if you’re questionable.’ We had no inkling he was even questionable until he got here. It’s the way he is.”

Because the team didn’t learn about Clifford’s availability until the morning of a game day, there was no time to recall a player from AHL-Ontario to join the team in Columbus. With Trevor Lewis also unavailable because of an upper-body injury, the team dressed 11 forwards and seven defensemen in the win.

“It’s just ironic that we’ve got our minor league team down the road, and if it had happened at home, we were fine. We move [the team west] and we’re here the first time it happens,” Lombardi said.

Because the Kings are shorthanded up front, forward Michael Mersch will be recalled from Ontario, Lombardi confirmed. Though he could make his NHL debut as early as Friday, when Los Angeles will be in Pittsburgh, it wasn’t immediately clear whether Mersch would arrive in Columbus in time to practice on Wednesday.

“I think Mike’s got a quiet confidence about him. He knows his abilities, knows what he can and can’t do,” Reign head coach Mike Stothers said. “He gets around that net and I don’t know if there’s anybody that’s hungrier. He just will not be denied.”

Mersch, who was impressive in training camp, has 12 goals, 15 points and 93 shots on goal in 19 games with Ontario this season after potting 35 goals in a combined 94 AHL regular season and playoff games one season ago. The 23-year-old University of Wisconsin product stands 6-foot-2 and weighs 224 pounds, and throughout his career has shown a willingness to go to hard areas of the ice.

“I don’t think anybody goes to the net better than Mike,” Stothers said. “Nobody protects the puck, nobody stands in front and takes the punishment that big Mike does.”