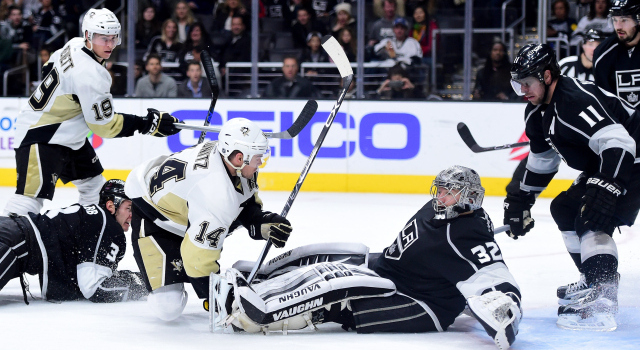 On three goals coming from the defense:
I think we don’t get much respect in that in terms of that in terms of from our back end because everybody just talks about Drew and that sort of goes down from there, but it’s something even after last season that we felt that – I forget what we were, but we were top-10 in production from our defense, and that’s what we expect, and tonight’s a power play goal involved in that, too. [Reporter: Good to see Ehrhoff get his first one?] Same thing she just said. Good to see the defensemen score.

On Milan Lucic:
I thought tonight that line’s effectiveness was because of Looch. Really, the empty net goal is the very same goal as the wristshot goal. It’s a power move. Not many guys can do that.

On Pittsburgh’s comeback attempt:
They’re a high-end team over there. They’ve got special players. If you don’t watch Pittsburgh, if you give ‘em three or four opportunities – what’d we give ‘em, five or six chances? If we’d have tied or lost or something, we’d have been the same. Said we played a good game. That’s what I told the players. I thought we played a really good game. Didn’t expect to beat ‘em four-nothing. They’re a good hockey club. Very good hockey club.

On whether there are any adjustments to be made for the back-to-back:
No, we’ve been good on back-to-backs, actually. This’ll be our fourth, and I think we won the second one of the first three, so you know what? We’ll get a good effort. It’s in a lot of ways the same type of team we’re playing tomorrow as we played today. We were just in Tampa and played ‘em too, so we can review some of that with the guys and hopefully be ready to go.