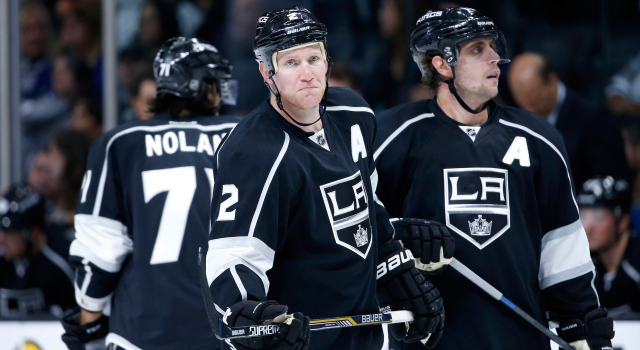 Right-handed defenseman and alternate captain Matt Greene will undergo shoulder surgery on Thursday, hockey operations informed LA Kings Insider on Tuesday afternoon. Though there is no clear timetable on Greene’s period of recovery and rehabilitation, the veteran will be out long-term.

Greene suffered an “upper-body” injury during a preseason game in Denver on September 27. Though he returned for the start of the season and appeared in Los Angeles’ first three games, he suffered an injury during that time that Darryl Sutter said was in “the same area” as his preseason ailment and was ultimately placed on injured reserve on October 23. Though he had returned to practice in a limited capacity in mid-November, he didn’t travel with the club on the most recent five-city road trip and instead skated and exercised back at Toyota Sports Center. Greene appeared late in Friday’s practice, though he was again limited in his on-ice activity and did not join the club on the ice for the morning skate Saturday or practice on Monday. While continued rest and rehabilitation was one of the options the Kings were considering, an MRI on Monday revealed issues that had to be corrected, and the decision was made on Tuesday that surgery was the preferred option for the 32-year-old.

Greene has not been placed on long-term injured reserve, and I’ve been told that such a designation would be a “down the line” consideration. The Kings would be able to free up $2.5-million of additional cap space should they ultimately choose to place Greene on LTIR. According to financials available at GeneralFanager.com, Los Angeles has $1.46M of cap space at the moment.

Though the Kings have fared well in Greene’s absence – they’re 14-5-1 since their 0-3-0 start – the absence of an emotional conduit and bruising physical presence shouldn’t be understated. Though the team had fared well following the departures of other veteran team leaders such as Justin Williams, Jarret Stoll, Mike Richards, and, if we’re looking back a touch farther, Willie Mitchell and Rob Scuderi, it will now be tasked with enduring for most, if not all of the season, without one of the most resonant voices and stalwart defensive figures in an accomplished dressing room.