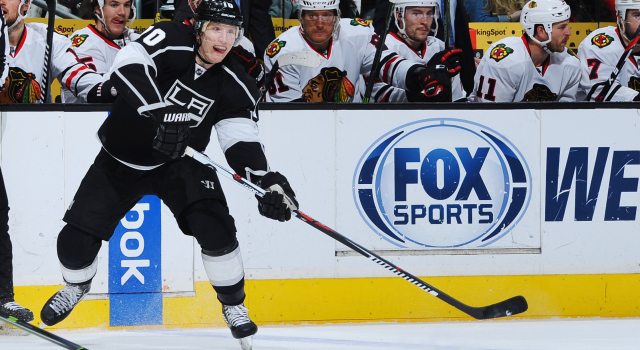 By the primary and secondary counts, Christian Ehrhoff had a solid outing in Los Angeles’ overtime win over Chicago on Saturday. He finished with an assist and a plus-one rating, and over his 18 and a half minutes of work, he attempted four shots, issued three hits, advanced the puck well and had an opportunity to end the game on a well-timed pinch in overtime before his redirection sailed wide of Scott Darling.

“I was skating well, defending well, being quick on guys and breaking out of our own end quick, and yeah, it was a good game,” he said.

A chat with hockey operations on Monday as well as a cursory glance at the advanced stats underscored what the eye-test had illustrated. Ehrhoff was superior in pushing play towards the offensive end when he saw the ice against Marian Hossa (+6 against Hossa in shot attempt differential), Marcus Kruger (+7) and Teuvo Teravainen (+5).

“He had a strong game last game,” Darryl Sutter said before noting that he’ll continue to evaluate Ehrhoff on a game-by-game basis.

Ehrhoff appears to be trending well in any grading or evaluation. While Sutter noted earlier today that changing conferences may cause a blip in a player’s assimilation to a new team moreso than any differences in playing styles or systems, it still appears as though the most recent stretch – the 33-year-old has played in four straight games after alternating with Derek Forbort in mid-November for two games in, two games out – represents an elevated stretch of hockey from the earlier part of the season.

“I just have been playing better overall,” Ehrhoff said. “I think the defensive side of the game, where I have to make some adjustments from the way I played before, to what is expected of me here, I think it’s taken some time, but it’s getting to a point where it’s getting a lot better.”

That adjustment came from a more direct approach to defending and limiting the opponents’ time of attack.

“In the defensive zone, we are a lot more aggressive, meaning being quick on a guy and trying to shut down plays so we don’t spend as much time in the defensive zone versus, you know, just playing on the D side and giving the opponent some more time to make plays,” he said.

“It’s an adjustment you have to make, and it takes a little bit of time, and I think I’m getting there a little better now than I was at the beginning.”

Ice time isn’t guaranteed, however, and Sutter acknowledged that he’ll continue to rotate in a platoon with Forbort. But by virtue of his recent play, there’s the expectation that his performances are replicated regularly.

“He’s a veteran player that’s still got a good skill set, and it’s not any different than it was October 1,” Sutter said. “You’re looking for consistency, and you’re looking for guys who play to win and do it every night.”

Christian Ehrhoff, on facing Vancouver:
It’s always fun to play an old team, there’s not that many guys left from when I was there, but still the Sedins are there, they’re always a good challenge to play against. It’s a big time of the season for us, this home stand, to win some games, especially after they’ve come into our building before and beat us, so we have to make up something tonight.

Ehrhoff, on the Sedins:
Yeah, they are two elite players in this league. Some people maybe don’t give enough credit because they’re not as big and physical as some of the other guys, but when you look at stats, they are right there, they are on top with some of the other greats that played in this game.

Ehrhoff, on whether being scratched provided any different perspective:
No, not really. Obviously, the game slows down when you see it from upstairs, but I wouldn’t really say that that brought my game to another level or changed something about it, it’s more my personal mental focus, and you know, working on those areas.

Ehrhoff, on Los Angeles’ defense:
They are really good players and most people in the East don’t really know about them, everybody knows about Drew because he’s one of the really elite players in the game, and he would probably get more credit if he was on a more covered Eastern team too, but like you said, Muzz and Marty, they are two of the top defenders to the way they play their game, Nabber, I played with him in Buffalo, he’s made a great development since coming here, so I think it’s a really good D corps and it’s only going to help us moving forward as a team.

Alec Martinez, on his chest bumps with Milan Lucic:
I think that started on the road somewhere, but I guess one chest bump for every point that we got.

Martinez, on the friendly checks along the boards in warm-ups:
Yeah, I guess Lewie and I have that thing during warm-ups, I don’t know. It was obviously a big win, and Looch is an energy guy, and I don’t know, it just started happening on the road, and I don’t think it’s going anywhere anytime soon.

Brayden McNabb, on defending a three-on-one:
You just kind of let the goalie take the shot and make sure you don’t let anything go side-to-side as best as possible. Up high cross-ice pass, that’s all right, but try and take away the low pass.

McNabb, on Martinez’s overtime three-on-one break-up on Saturday:
That was a great play. I think he kind of slid and got a good stick on it, and especially on three-on-three, we saw with Dewy in the three-on-one a few games ago, and Marty last game, so it’s something you’ve got to be ready for, especially with three-on-three.