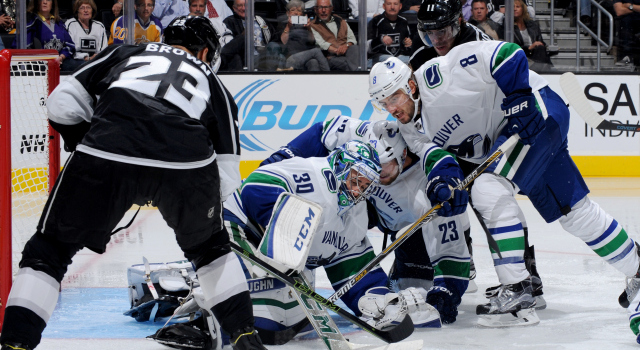 “The Central Division is a step up,” Darryl Sutter told reporters last month.

While the Kings have risen to the challenge by posting a 6-1-0 record against the league’s most top-heavy collection of geographically-grouped teams, it does raise the question about the team’s early season struggles to get going versus a group that hasn’t yet proven to be as much of a murderer’s row: the pacific Pacific.

Los Angeles is only 3-4-0 against the Pacific Division in advance of a rivalry game Tuesday night against Vancouver. The Kings fell 3-0 to the Canucks less than one week into the season, their third straight loss before embarking upon their current 14-5-1 stretch. Of those five regulation losses, four were narrow, one-goal defeats. One came against Arizona, their second home loss of the season to the Coyotes.

“I think you look at it in multiple, different ways,” Alec Martinez said. “We obviously didn’t have a good start at home, and this is a home game, we have to turn this home record around. I believe that was our [third] game, against Vancouver, and we weren’t really obviously happy with our starts, so you look at it that way, and you also look at it as a divisional opponent, those are a big two points up for grabs. It’s no secret how tight things are, especially in the West, and especially within the Pacific Division. You might be in one spot, and then you don’t even play that night, and then all of a sudden you’re out of a playoff spot, so yeah, this is a really big two points.”

That one poor stretch of two or three games has such an impact on a team’s playoff footing (if such a thing exists on the cusp of December) isn’t necessarily a bad thing. No team has broken open the Pacific Division, as Anaheim has done for the three previous seasons. When the dust settles on April 9, it’s becoming more likely with every passing day that the divisional race will be the closest it has been since 2011-12, when Phoenix (97 points) edged out San Jose (96 points) and Los Angeles (95 points) on the final Saturday of the regular season.

Which, of course, places a heightened emphasis on the only divisional game the Kings will play until they finish the calendar year with five straight games against Pacific Division clubs.

“There’s not enough difference in the teams,” Sutter said. “There’s so much that’s got to do with schedule or injury or how the team’s playing at that time or what’s going on. It’s not enough of a gap between the teams.”

Vancouver, which plays in Anaheim tonight, is looking to make sure that the gap doesn’t widen. The Canucks’ travails have been emblematic of the lack of gaps in the league standings; though 2-4-2 in their last eight games, they’ve beaten Chicago and Minnesota in that stretch while narrowly losing in a shootout and overtime to Dallas and Montreal, respectively. Vancouver is 0-6 in overtime.

“I think that the two games that we’ve set up, that we’ve talked to the players about, is the Chicago game and this game. They’re both very similar,” Sutter said. “We had a day off, then a practice and a game. That’s how we’ve approached it, and we won’t go past tomorrow on it.”

Alec Martinez, on the team’s 6-1 record against the Central Division:
I mean, I don’t really know what the reasoning for it is, but I do know that our divisional record isn’t good enough, so regardless of what the Central is or not, we have to do a better job of getting wins in divisional games.

Martinez, on the gap between Tuesday’s game and Saturday’s game:
I mean the schedule’s the schedule, we’ve had a couple of days here where we can recover, but I think we had a good practice here today, and we had a good one the day before Chicago. It’s good to get the rest, to let the body recuperate, but I think that it’s important that you’ve got to stay on your game, that when we are at the rink, like today at practice, that you’re focused and you’re playing well, so I guess you can use it to your benefit, in terms of rest, but at the same time you have to make sure that you still have your up-tempo, and that you’re still focused.