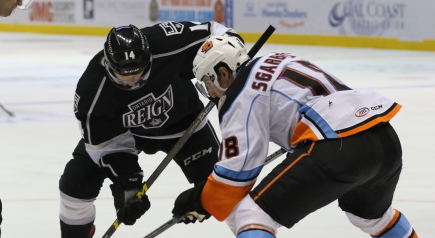 Mike Stothers, on the carry over on a back-to-back:
To a certain extent. Hockey is a game where you can’t … if things don’t go your way you’ve just got to learn to put it behind you and move on. You know what I mean? You don’t harbor things, but I think it’s going to be a pretty good matchup the rest of the year.

Stothers, on what he was saying to McGrattan after fight with Bissonnette:
Just asked him how his family was. There’s nothing to it. I suppose he must have read the tweets I guess of my postgame comments (from Friday). I stand by what I said. He doesn’t like it, too bad.

Stothers, on the weekend:
The weekend is kind of a little blip on the radar for us. It doesn’t … obviously didn’t go the way we wanted. As we talked about earlier, you put it aside and you move on. We’re already looking forward to Monday because we’ve got a good week of practice in front of us before we head to Charlotte for a couple games. It’s a long season. You’re going to have some real great weekends and you’re going to have some weekends that you wish you could do over again. But you know what, we just keep marching ahead. We know that’s a good team, but we know we’re a good team.

Stothers, on the fourth line with Bissonnette, Sabourin and Horvat:
That’s what you want out of those guys. They’re energy guys. Getting Biss back is huge. The guy, how long was he out, he missed six games or something, and first shift he goes up and fights McGrattan. You talk about a character guy, you talk about a teammate, you talk about a guy you need in your dressing room and on your bench. He’s involved all game long whether he’s pumping up our guys or chirping the other team. I think that line with Horvat and Bissonnette and Sabby, they went out, they’re a little reckless, they bang around, it’s exciting. You really don’t know what’s going to happen out there. Both sides don’t know what’s going to happen out there. You just stand back and go, ‘I wonder what’s going to happen now,’ and that’s the beauty.

Stothers, on the power play:
What’d we go, 0-for-7? We had ample opportunity, it didn’t work. Again, I go back to the fact that our power play’s been pretty darn good all season long. The fact that it didn’t have success tonight, I’ll still sleep well tonight. It’s going to happen. That’s what you do in sports. We know that they’ve been responsible for us winning a lot of games. It balances itself out over the course of the season I guess.

Stothers, on the PK being hot early in season and what’s different now:
Do you think you’re going to run at 94 percent? It’d be unbelievable if we could, but you go into this game and you’ve got the two best power play teams in the league going head to head. The fact that they only scored one, I think that’s a moral victory right there. It’s unrealistic. You guys were the guys that kept talking about it and I knew it was going to come back and bite us in the ass because you guys kept talking about it. (Reporter: Sorry). I’m just saying, it can’t stay perfect. It’s like anything else. At the end of the day I’m real happy with where we’re at. I’m real happy with the guys we have and come Monday we’ll be the hardest working team in practice and we’ll get ready for an upcoming weekend in Charlotte.

Michael Mersch, on the power play:
The power play is where it starts and finishes at. We had I don’t know how many chances tonight but didn’t really have any momentum on it or anything. It’s a long season. I think there’s going to be different units eventually. There was in the beginning of the year than they are now. We do enough of it, we have enough games where we work on it so it’s nothing different. It’s the same thing. We’ve scored on it, we scored two last night. Tonight it wasn’t clicking. Maybe they made some adjustments and we didn’t but we scored two last night so why make any adjustments? Just wasn’t clicking tonight, bottom line.

Paul Bissonnette, on his fight with McGrattan:
I wasn’t in the game last night I just heard and saw what happened. Just doing my job. I think it kind of takes him out of the equation and kind of maybe settles the other guys down a little bit. He’s a pretty scary guy and he’s been around for a long time. Just doing my job.

Bissonnette, on the play of the 4th line:
We drew a few minors which, trying to get us on the power play. It’s tough to score even strength in today’s game. It’s so structured. I thought we did a good job of that. Getting on the forecheck, creating some havoc. We didn’t capitalize but I thought we brought some good energy.

Bissonnette, on the ice conditions after CBBA hosted afternoon soccer game:
It wasn’t great. No excuses, but I think we’re a puck-possessing team and I don’t think did us any favors. Nonetheless, we really wanted this one I think it just kind of, maybe we were, everyone was trying a little too hard maybe. Sometimes you’ve just got to let things happen and stay within your lane and let things kind of unravel. It seems like a lot of guys just wanted it real bad and it just didn’t fall our way.

Bissonnette, on the rivalry:
I think in preseason we kind of established it was our rival, yeah of course because of the big clubs too. They’ve got some toughness and they play a hard, chippy game and we like to do that too. So far you guys have seen it, I think we’ve played three games against them and there’s been quite a few fights and hitting and guys are taking runs at each other so it should be interesting. We’ve got another nine against them, so it should pick up.

Scott Sabourin, on the pace of the game:
They played a hard game against us last night so we kind of just wanted to match that intensity and I thought we did a good job we just came up a little short. We had a tough time finding the back of the net, but it’s not the end of the world so we’ll be all right.

Sabourin, on the power play:
It’s not really my forte but the boys’ve got to get pucks to the net. We’ve got to find a way to score. We’re going to work on it this week and we’ll get to where we need to be.

Sabourin, on what carries over from game to game:
It definitely wears on you, especially, we play San Diego 12 times or something. There will be a good rivalry and if something happens the night before and we’re not happy about it it’s going to get addressed the next night. You’ve got to be team tough and I thought we showed a lot of that tonight.

Sabourin, on carrying the rivalry to the NHL level:
That’s the hope. That’s the plan.