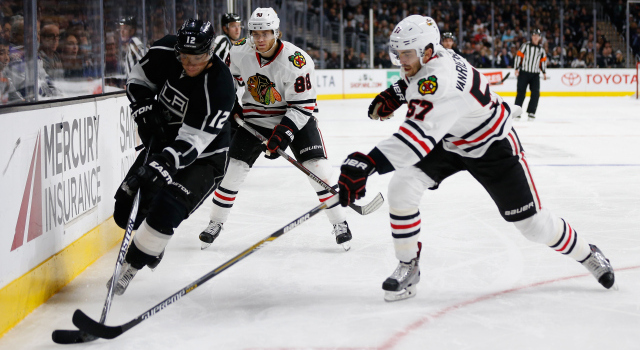 Gaborik, on whether he was proud of the team’s game-long effort:
The first period wasn’t as great as we wanted to play, but we picked it up in the second. Even though they had a two-nothing lead, we were talking about how we weren’t quitting. We had a lot of shots and a lot of pressure and a lot of chances as the game went on, and we were talking about trying to get to Darling and keep him in the net there and create traffic and just drive the net. We did that with some chances. Jeff cut it in half, and then we were able to come back and win it.

Gaborik, on coming back to beat the Blackhawks:
I think it was a great game for the fans. You could hear the atmosphere was unbelievable, and like I said, we never quit. That team over there on the other side, that’s a great team. We came up short in their building, and we’re happy we were able to redeem ourselves and get two points in this building and come back.

Gaborik, on winning a game it didn’t look like they would win:
Well, I mean, we never thought that we weren’t going to win. There was a no-quit attitude, and we knew we could come back and we sustained a lot of pressure in their zone, like I said, as the game went on, and we were able to capitalize.

Gaborik, on how much fun the game was, given the recent head-to-head history:
Well, they’re fun if you win, obviously, so it definitely feels good now.

Gaborik, on the mood and urgency on the bench:
Like I said, we never quit. We had a lot of chances as the game went on, and as towards the end we were pushing ourselves into the net. We created a lot of traffic in front of him, and we sustained some forechecks and some pressure in their zone, and that was the mood – just keep going, keep going, and try to tie it up.

Gaborik, on whether it feels good to contribute:
Yeah, it feels good to contribute, and to get these couple of points here against a great team, we’ve just got to keep it up. We know we’re starting off on the right foot at home. I don’t know if we have four games or five games at home now, but we started off well and we just have to keep going. We have Vancouver next, a big division game, and definitely, this feels great. [Reporter: For you, what do you attribute the change and improvement to?] I don’t know, just trying to move my legs and getting to scoring areas and keep my feet moving, forechecking, and just trying to contribute, and it feels good.

Christian Ehrhoff, on the win:
It was definitely a good character win for us. Coming from two goals down, it’s always nice for the team to get a win like that, and I think everybody at Staples enjoyed that game, too.

Ehrhoff, on the mood and urgency on the bench:
We didn’t panic. We stuck to our game plan, and we just kept pushing in the third period, and finally we got rewarded on Carts’ goal, and we kept going forward and got the tying goal, and then obviously in the overtime, there are a lot of chances going each way, and we had the better end for us tonight.

Ehrhoff, on whether there’s “optimism” in seeing Marian Gaborik contributing:
For sure. It’s always great when different guys chip in and we don’t always have to rely on the same guys that have carried us early on. It’s nice to see him get a couple tonight.

Ehrhoff, on whether Jeff Carter’s goal changed “momentum and belief”:
It definitely gave us belief, but we said we wanted to have our best period in the third, and we came out good, and like I said, we stuck to our game plan even though pucks weren’t going in for us early, and we got rewarded in the end.

Ehrhoff, on whether overtime is as exciting for players as it is for fans:
Yeah, I love it. I think it’s very exciting, and I’m sure the coaches would rather not see those twoon-one chances exchanging each way, but that’s the way it is. The NHL wanted to see some more games finish in the overtime and get it a little more exciting, and I think that’s what they’ve gotten. I think the fans love it.