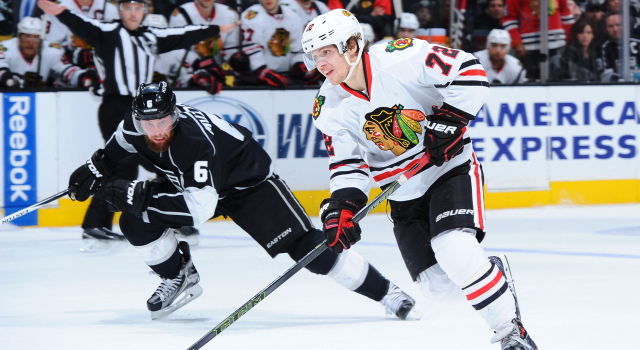 Patrick Kane, on whether this game was similar to their game in Anaheim:
Yeah, same exact game, opposite way. We had a 2-0 lead, we just kind of seemed like we wanted to sit back and play it safe. Obviously that doesn’t work in this league. It’s frustrating when that happens. It would’ve been nice to get another insurance marker and build off that, but we just kind of sat back there in the third and they took it to us.

Kane, on whether it’s natural to play a conservative game with a lead in the third period:
I guess it’s natural to do that. But at the same time, a lot of guys have played a lot of games in this league to know that’s not the recipe for success, especially with the way games can turn on a dime these days. It’s pretty frustrating right now. Especially because going into the third period 2-0 that’s looking like it’s going to end on, that the trip is going to end on a good note and couldn’t follow through.

Kane, on how he feels after breaking the American-born consecutive point streak:
Yeah, it’s cool. You think about how many great American players have played the game, the two players who were at that 18-game point streak and what they’ve done in their careers. It’s pretty cool. Right now, like you said, it’s overshadowed by the loss. So hopefully we can come out and finally get back home and play the game in front of our fans at the United Center.

Kane, on whether knowing Eddie Olczyk and Phil Kessel adds anything to the record:
It’s great. I think that definitely adds a little bit more to it. I’ve become pretty close with Eddie over the years here, to the point where I ask him for advice on a lot of different things and he’s willing to share all of that, too. I’ve known Phil pretty well since I was 16-years-old. Two great players, two great careers and [it’s] fun to be there with them.

Joel Quenneville, on whether the loss leaves him with a sour note:
Well, we got a point and we had our chances. [Jonathan Toews] had a breakaway late and we had two A-plus chances in overtime. They had some high quality as well. So it was a pretty good trip.

Quenneville, on Patrick Kane breaking the American-born point streak record:
Amazing to watch, pretty amazing how he is game in, game in, shift out, shift in. What he’s been doing with the puck – generating, creating. That line, offensively for us, has been the backbone of our team. He’s been great. I can’t say enough positive things about him or his play.