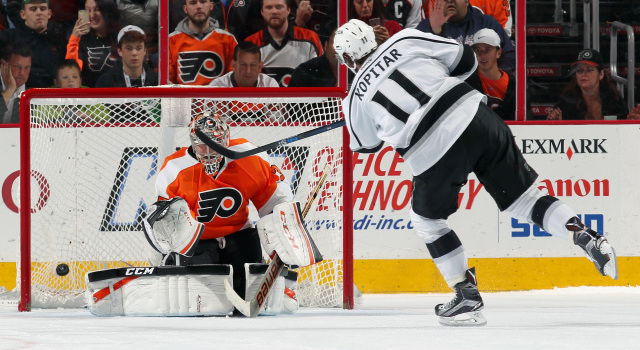 Darryl Sutter has repeatedly expressed his acceptance for three-on-three overtime, which was implemented to keep an excess amount of hockey from being decided in the shootout. That’s probably a good thing for the Kings, who missed out on the playoffs last year largely because of their 2-8 shootout record (though they’re 59-56 all-time in the shootout).

But with scoring flat lining, and teams perhaps inclined to play for the safety of a guaranteed point, common sense would dictate that more games will be decided after 60 minutes, and after passing through the sieve of three-on-three overtime, plenty of games will still be decided in the shootout. For Los Angeles, that happened for the first two times this season on the most recent road trip when the team won in Philadelphia and lost in Tampa Bay in the skills competition.

“I think it was something we talked a lot about in the off-season, and we put a focus on our guys working on that as far as their off-season training,” Associate Coach John Stevens said. “There’s been less talk about the shootout this year with the three-on-three, and I could be wrong at this, but there seems to be a trend – I don’t know if the numbers will back it up – but it seems like teams are figuring out the three-on-three. It’s not as wide open as it was. It’s a little more tight-checking. You’re still getting chances, but not the amount of chances you were seeing early on in the season, and I think there are more games going to a shootout.”

Eight NHL games were decided in overtime or a shootout last night, tying a record set on February 22, 2007. Of those eight, three went to a shootout. 23 of the 30 teams have participated in a shootout this season, with Ottawa and Toronto already having skated through six.

“It just seems like teams are tightening up a little bit, getting a little better feel for the three-on-three,” Stevens said. “I don’t think you’re seeing the amount of chances you saw in the past, but certainly there are going to be chances. We feel like we’re trying to win the game before we get to the shootout, but the shootout can still be a difference between a point or two points, so it’s still important.”

Goaltending Coach Bill Ranford is available to the players before the game to analyze the opposing goalie’s tendencies in the extra sessions.

“I have three or four moves I like to use, and he gives me the ones he thinks will work and that’s how I approach it,” Dustin Brown said. “I just don’t like to overthink it.”

Brown is yet to participate in a shootout this season, though with a 32.2% success rate in his career (19-for-59), the captain will get his chances. He’s already converted his only penalty shot attempt on the season, having beat Cam Ward in Carolina one week ago.

“I have a few moves that I’ve been using and that one was one I’d used very early on,” he said. “Like right when the shootout was first implemented, that the moved I used that worked pretty regularly. So I haven’t used it in a while, I just tried to bring it back.”

But expect to see Jeff Carter and Anze Kopitar line up as the first two shooters, as they’ve done through the first two shootouts of the season. Carter, a 32.3% shooter in his career (10-for-31), is 0-for-2 thus far, while Kopitar, a 37.9% lifetime shooter (33-for-87), has scored on both of his attempts. The status quo is likely to continue as long as both players are available.

“If you look at their career numbers, they’re pretty darn good,” Stevens said. “Of these other guys, Brownie’s been pretty good in the shootout. Dwight King, when he was healthy, is pretty good in the shootout. So there are certainly other guys you can go to. Tanner Pearson’s a guy that’s a young kid coming along that can be an option in the shootout, but I think the guys that we use [currently] are always going to be options because of their history and their skill set and what they’re capable of.”

Dustin Brown, on whether last year’s shootout numbers were an anomaly:
If you look at Carts, he’s a guy that goes a lot. Kopi has a lot of variations, but Carts had that one move where he makes that quick backhand. I don’t know what his shooting percentage was last year, but goalies – just like we’re scouting goalies – they’re scouting the shooters and they start to learn your moves. It’s important to change it up or have multiple moves you can do off the same kind of entry.

Brown, on how the team prepares for a shootout:
It’s pretty much been the same. It’s really something we practice all that often. It’s just you kind of get your work in practice. Every once in a while, we specifically address it where we have a team-wide shootout. But I think that’s more to just have a little bit of fun. It doesn’t really change our approach now.