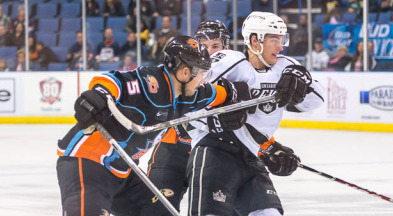 Reign game breakdown
The Reign (11-3-2-0) ran out of time in a 3-2 loss to the Gulls (10-7-0-1) on Friday night in San Diego. Michael Mersch scored both goals for his 10th and 11th of the season and Ontario pulled goalie Peter Budaj while on the power play with 1:25 left in regulation but could not convert despite pressing and skating 6 on 4. The Gulls, the Anaheim Ducks’ AHL affiliate, went up 1-0 after the first period and never trailed in this game on goals by Nic Kerdiles, Kyle Bonis (his first) and Shea Theodore.

Three stars
–Michael Mersch – The left wing scored off a deflection of a Nic Dowd shot in the second period and followed with a goal midway through the third that got the Reign back in it at 3-2. Mersch grabbed a shot from the point by Kevin Gravel with his glove, brought it down to himself and deked Gulls goalie Matt Hackett for his team-leading 11th goal. Both his tallies came on the man advantage.
–Shea Theodore – The San Diego defenseman’s shot from the left point beat Budaj high on what was recorded as the game-winning goal. Budaj had no chance while being clearly screened but Theodore’s power play blast was also clearly placed where it needed to go. Theodore, the Ducks’ first-round pick in the 2013 draft, finished at plus-2 in this penalty-filled contest.
–The physicality of San Diego – The last time these teams met the Reign had the services of rugged veteran Paul Bissonnette. They missed him policing the ice tonight as he remains out with a back injury. At times San Diego rattled the Reign, the worst being a dangerous charge by Brian McGrattan on recent Reign call-up Derek Arnold in the third period. Young defenseman Kurtis MacDermid didn’t mind getting in there with the veteran McGrattan to let him know that kind of play would not be tolerated as both picked up misconducts, but Bissonnette presence would have benefited Ontario overall.

Turning point
Mersch’s goal in the third changed the pace of play to a wide-open game where the Reign were pressing for a comeback. That set the Gulls on their heels a bit and they took two careless penalties, the last being a Mike Sgarbossa tripping call on Nick Ebert who was trying to breakout from the Reign zone. The call against Sgarbossa, which came after a flagrant cross-check by Shane O’Brien, gave the Reign a golden opportunity to tie it but the Gulls blocked shots and swallowed the puck against the boards to work the clock down to zero.

Stat fact
56 — Penalties in minutes total between the two teams. Easy to say that a rivalry is brewing here between the AHL affiliates for the Kings and Ducks. The season series is now 1-1, but they have 10 more meetings to play out. Ten.

Next up
They’ll do it all over again Saturday night as the Gulls get to make the haul to Ontario for a 7 p.m. puck drop.