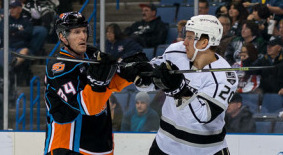 After every Reign away game we’ll try to catch up with Reign head coach Mike Stothers to get his take on things. Here’s what he had to say after Friday’s 3-2 road loss to the Gulls.

Gulls 3, Reign 2
Michael Mersch scored two goals (his 10th and 11th of the season) but the Reign never led in this physical, penalty-filled tilt with the Ducks’ AHL affiliate. Ontario lost in regulation for just the third time this season and saw its three-game winning streak snapped. Mersch’s third-period goal made it 3-2 (after San Diego had gone up 2-0, then 2-1 and 3-2), but the Reign could not capitalize on a 6 on 4 opportunity as time expired.

Question: Good battle there at the end. What do you think happens in this game if you have five extra minutes of time?
Stothers: Probably take more penalties

Question: Haha. No tying goal? Speaking of penalties… What did you think of SD’s physicality and how it played into the game — particularly seemed like a dirty hit from McGrattan.
Stothers: We always believe we are going to score the tying goal. And we always believe we are going to score the winning goal. That is the mindset a good team has when trailing. As far as the physicality of our opponent that was to be expected going in. We know they are big, tough and physical so that is not surprising. What is surprising to me is the lack of respect McGrattan had for the “code of a fighter”? The hit itself is one thing but why would he throw not one, but two punches, to the face of MacDermid when the linesman had “both” tied up. MacDermid is defenseless at this point and could have been seriously hurt. I certainly would expect better of a guy that was once considered the heavyweight champ of the NHL. Physical is one thing, and a fair fight I can live with, but I can not stomach watching one of my players being taken advantaged of, and possibly injured.

Question: Do you miss Biss in a situation like that? And how does this all carry over to tomorrow, seems like a rivalry is actually brewing.
Stothers: MacDermid is a tough kid and can handle himself…but he can also play, and has a very promising future as an NHL regular. That situation should be handled by the referee, no one gets senselessly injured going forward. Tomorrow we need to skate better than we did tonight. We are much better playing on our toes and pushing the pace north. We will be better, I trust this group