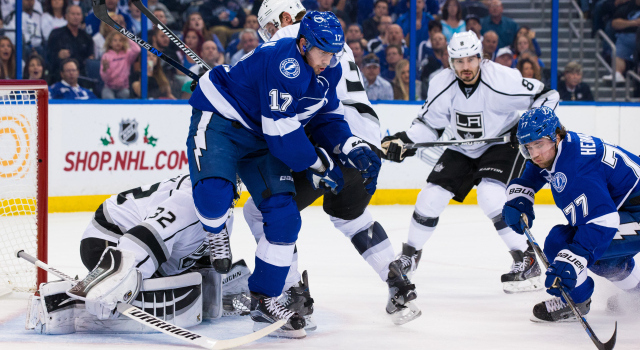 On the shootout loss to Tampa Bay:
Fought back, played hard. No complaints.

On taking away the Lightning’s speed:
We knew they’d come out hard, and they did, and we were able to match it, and we’re a fast team, too.

On whether Drew Doughty played one of his best games of the season:
I think our defense as a whole played a pretty good game against a really skilled team.

On finishing the trip 2-2-1:
It’s what we talked about. I thought we had an opportunity to win every game. Battled back, had chances to tie it every game and win it, and continue on. Good test of character, and we showed up.

On Milan Lucic scoring another big goal:
I think the line probably could’ve had three or four tonight. In the first period, the same forecheck play as they did in the third. They had a couple of them in the second, too. Probably an unfortunate night that we didn’t get a power play. Had we got one, we would’ve scored on that, too.