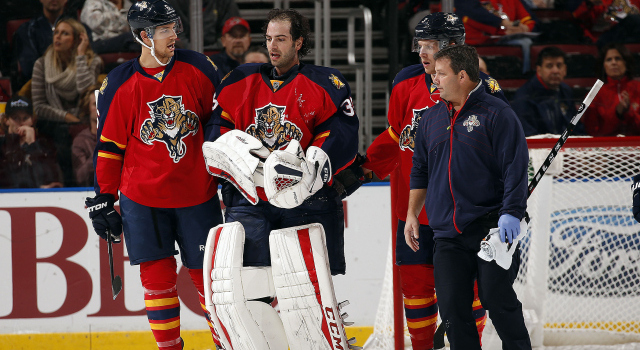 With the rule changes that now allow for coaches to challenge a goal or no-goal call on the basis of “Interference on the Goal Keeper,” Darryl Sutter spoke before the season about how an official’s discretion would weigh heavily on goaltender interference calls, and that the original calls would almost always stand. This theory was put into practice when the Kings were unsuccessful in their first coach’s challenge of the season.

Sutter didn’t want to get into the specifics about Rule 69.7, in which incidental contact is permitted if a goaltender and attacking player are “simultaneously attempting to play a loose puck.”

But he did articulate that the puck stuffed into the net by Nick Shore in the first period of Monday’s 3-1 win at Florida should have been a good goal, that protocol was clearly followed, and that the Kings simply missed out on doubling their early lead because of the original no-goal call and the officials’ discretion. He explained the two separate processes at work during a play in which Al Montoya was unfortunately injured and had to be removed from the game:

“…99% of all goalie – whatever you want to call that word, interference, or whatever it is – is still the discretion of the referee, so if you looked at the play, I’m sure if you were watching it live, that Dave Jackson was standing behind the net and waved it off. Correct? Correct. … So he waved it off. Then he goes over, the net comes off, also. So, first off if he’s going to wave it off, he’s going to go check to make sure because the rule is that we can throw our shoe out, right, if we think it’s the wrong call. So he made the right call by going over there and checking and saying, ‘the puck was in the net before the net was off.’ The net came off, too, so that’s what they reviewed. So that’s not a coach’s review. He goes over and checks. OK, just in case there is a coach’s challenge, was the puck in the net before the net comes off? So that’s what it is.”

“Then they come over. They did everything right. It’s very standard protocol. … So they came back, asked if we were going to challenge, I said, ‘yes.’ They went up, and still, it was discretion. He looks at it. Reviewed. The guy’s hat was off – the goalie’s hat was knocked off – and they had to call the wagon to get him off the ice, so it was tough to go the other way. It’s a goal. You know what? That’s their interpretation, but I’d throw it every time on that, for sure. Why wouldn’t you? The score’s one-nothing. It’s better to have a two-goal lead than a one-goal lead.”

For what it’s worth, Sutter also noted that he thought that a penalty shot should have resulted from Aaron Ekblad’s first period hook on Jeff Carter’s breakaway. In the end, it mattered little because the Kings ended up winning the game, and, as he noted during the coach’s challenge, his players got a breather.

“…They probably sold 500 more beers. Had a six-minute intermission there.”