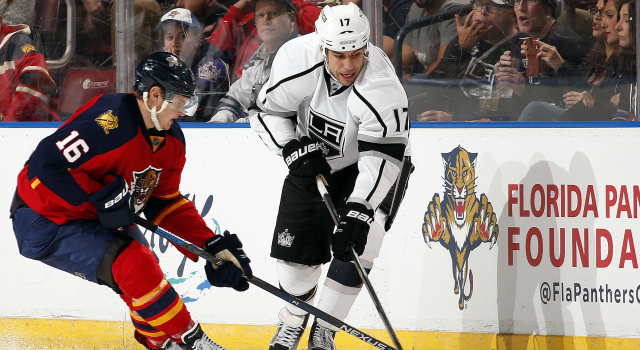 Tyler Toffoli, on what stood out about how the they established their game early on:
I think right from our first shift – Carts won the faceoff, we did the play that we wanted to execute, we got a couple chances and I think we just built off of that the rest of the game. I think there were times in the second there where things got away from us but that’s hockey. They’re a good hockey club and I thought we did a good job of staying with it and staying with our game and Gabby scored a huge goal there in the third.

Toffoli, on his goal in the first period:
I think it was just a good pressure in the corner. Carts and Looch ended up walking behind the net and I was just the one in front and Looch found me there.

Toffoli, on whether a “quick start” was emphasized coming into the game:
Yeah, we’ve been slow. Ever since Philadelphia, we haven’t really started that great. It’s something that we wanted to do and like I said, we executed what we had planned and ran with it.

Toffoli, on what he saw on Anze Kopitar’s pass to set up Marian Gaborik’s goal:
Nothing surprises me with Kopie, to be honest. No, that was a great goal by Gabby though. It was good patience and just lifting it right over the shoulder.

Toffoli, on the team’s mood after improving to 2-2 on the current road trip:
I mean that’s .500. We know that’s not a playoff hockey team. And we know going into Tampa what they bring as a hockey team and that’s going to be a huge game. We want to finish this road trip on the right note.

Anze Kopitar, on his assist on Marian Gaborik’s goal:
I’m in the D-zone and just I saw that Gabby had some speed and I was thinking of different ways to give it to him. And I guess the play that came out to him, I was just trying to get it over top and lay it there for him. I wanted to make sure it wasn’t too much on the outside so the guy can cut it off and it all worked out obviously, pretty well for us.

Kopitar, on whether the team established their game early on:
Yeah, that’s what we were talking about. There was a couple games where we fell behind in the first period lately and addressed it before the game. We just wanted to make sure we came out strong and make sure that we score the first goal.

Marian Gaborik, on Jonathan Quick’s performance:
Yeah, he was great. He kept us in the game and he was unbelievable in net. He made key saves. And like I said, they’re a very good offensive power on the other side there, so Quickie came up big.

Gaborik, on whether tonight’s game might spark his offensive production:
Well I hope so, definitely. It’s good to contribute offensively. I just have to keep skating and play a close game with the guys on the line and try to be in the offensive zone and keep going to the net.

Gaborik, on Anze Kopitar’s pass of the glass to set up his goal:
Yeah, I mean I saw him getting the puck and I just tried to get going and he made a nice play off the wall. I got ahead of the guy and went kind of against the grain on Luongo.

Gaborik, on whether it was important to have a solid first period:
Even though they scored a goal, I think we had a pretty good first period. We’re 2-2 on the road, so far. So we definitely want to come to Tampa and play our game come back with the 3-2 record off the road.

Alec Martinez, on Dustin Brown saying he had two consecutive game-winning goals :
Oh, yeah. Dustin did say that. Well, I’ll have a few choice words for Dustin about that. No, I’m just happy I was able to put it in the right one this time.

Martinez, on whether the team had been frustrated by not having a first period lead recently:
We obviously weren’t happy with our games the past two games. There was the thing that we weren’t doing well and that obviously reflects on the scores. We felt that we were giving up far too many goals against. I thought we did a better job of playing Kings hockey and we responded pretty well.

Martinez, on whether the team was glad they got to play games on back-to-back days:
Oh yeah, that’s a good way to look at it. You just have an opportunity the next night to turn things around and fortunately we were able to do that.

Martinez, on whether the first period was an important aspect of their win:
It was huge. You’re playing a team like that that’s got so much high-powered offense, they’ve got really good goaltending, they’ve got a lot of D that can skate. They’re going to come out and they’re going to come at you. So especially on the road, you’ve got to be able to weather that storm and try to establish our game and dictate how we’re going to play. That’s tough to do in an opponent’s building sometimes, but I thought we did a fairly good job of that.

Martinez, on whether Jonathan Quick had a nice game after being pulled the night before:
I mean that’s every night. Quickie is the best goalie in the world and he never quits on pucks. He’s always staying in the battle and staying in the fight.