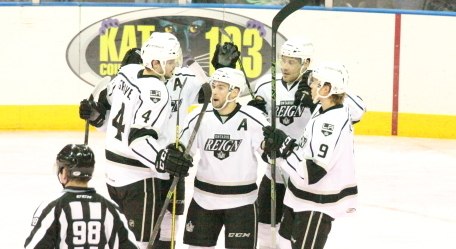 After every Reign away game we’ll try to catch up with Reign head coach Mike Stothers to get his take on things. Here’s what he had to say after Saturday’s wild 7-6 win against Texas and a short on what you missed.

Michael Mersch and Jordan Samuels-Thomas each had two goals in a back-and-forth high-scoring affair in which the Reign never trailed. Samuels-Thomas scored with 3:33 left in regulation to put the Reign up for good in what was by far the Reign’s most up and down game of the season. Goalie Ray Emery picked up his first win in his third try, stopping 31 shots.

Question: Well that was something. Certainly you have been through some crazy games, but what’s the overall feeling you take away from a game like that one?
Stothers: Insanity if you are either coach, and exhilarating if you are a fan. We persevered enough to get another valuable road victory and managed to do so without giving our opponent any points. We ended up getting what we came down here for…two wins

Question: From where you saw it, why do you think this game got so wide open?
Stothers: Just a poorly executed game from a defensive perspective. Missed assignments, improper reads, zero communication and a whole lot of being on the wrong side of the puck. It was about as structured as an All Star game. The only thing missing was the presentation of the car.

Question: With that in mind are you happy with the two points or concerned with what happened defensively?
Stothers: Happy with the two points, most definitely!! Concerned, not really. I think we look like a team that needs a couple of good practices. We will address that before our next game Wednesday. Work on some things from the D Zone out. We won an ugly one so the boys battled and never gave up. Now we go home and tidy some things up. All good.