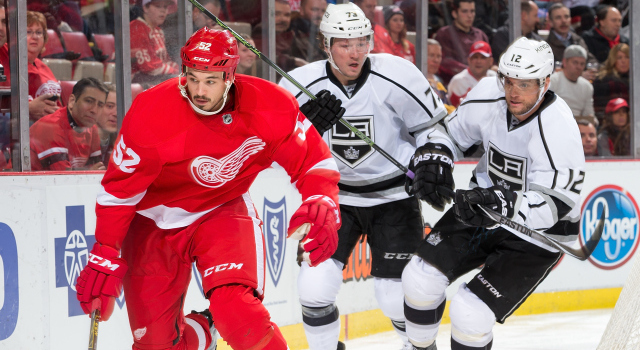 Jhonas Enroth, on Dylan Larkin’s goal in the second period:
Really it was just a tap in goal. It wasn’t too much on him, but I’ve seen him [in] a couple games. I’ve paid attention a little bit to teams around the league and he’s been having a pretty good start here. He’s been scoring a couple nice goals. You can tell he’s a goal scorer. So I was definitely ready to face him tonight, even though he just scored a tap in goal on me.

Enroth, on his performance:
I think I played solid. It wasn’t great, it wasn’t bad, but a solid game. You want to stop one or two or three pucks. But I thought I played OK.

Enroth, on how the team played in front of him:
The team, I think it was a good road game for us. We had a lot of chances and it was a tight game. It could’ve gone either way, I think.

Anze Kopitar, on whether it’s tougher to rally from a two-goal deficit against Detroit:
Yeah, like you said, teams nowadays they… everybody protects the lead pretty well and you just can’t be chasing the game. But at the same time, I thought we had some pretty good chances and just didn’t score. So I think first and foremost, we’ve got to make sure that mistake that we did on goals, they don’t happen again. On the flipside, just make sure that when we do get chances to put the puck in the net.

Kopitar, on how trailing late in a game affects their game plan:
Well obviously tonight, it affected the line rotation. In the end, it was a lot of juggling but we just try to get the tying goal. That’s pretty much the way it is. You know, maybe play a little bit more aggressive. But at the same time you can’t run-and-gun, not with a team like that. You’ve got to obviously stick to your game plan but obviously press as much as you can.

Kopitar, on his impression of Petr Mrazek:
I thought he played pretty well. Like you said, we fired a lot of rubber at him. We also had some good chances too, which it’s on us to capitalize on. But he was pretty solid, for sure.