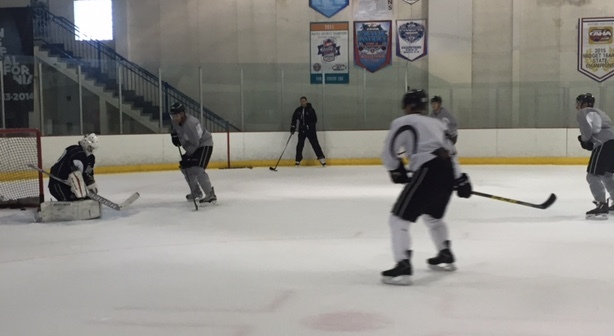 Some notes from today’s practice at Center Ice in Ontario.

–The Kings announced on Wednesday morning that Patrik Bartosak has been suspended following the goaltending prospect’s alleged violent altercation with his girlfriend on Monday that, according to the New Hampshire Union Leader, resulted in 12 “domestic-related” charges.

Bartosak was in Manchester as part of a conditioning assignment and was expected to return to Ontario following its completion.

–We’ll see a new line combination up front starting this weekend as Jonny Brodzinski will join the line of Nic Dowd and Michael Mersch. Stothers moved Brodzinski, a first-year pro out of St. Cloud State, to that line in place of Valentin Zykov during last Saturday’s 3-0 loss to Bakersfield.

“It wasn’t anything that Z wasn’t doing, you’re trailing, you’re just looking for a spark and we did it in the third period in Bakersfield and I liked it so I think we’ll start that way in San Antonio,” Stothers said.

Brodzinski has one assist in 12 games this season, but scored 20-plus goals in each of this three seasons with St. Cloud State.

“He’s a shooter. He’s a flat out shooter,” Stothers said. “Sometimes you need that on a line. You can have guys that overhandle, overpass, set each other up, they want to tic-tac-toe. This kid, he’s a sniper. I say that and he hasn’t found the back of the net yet, but if you look at his career in college and the way he can shoot a puck, it might be a good fit with those two guys.

“Dowder is really good at distributing the puck, and Big Mike wins a lot of battles and goes to the net so if we’ve got a guy like (Jonny) shooting and Big Mike in front, hopefully it’s going to result in some goals for us.”

There will be an inevitable trickle-down effect on the third and fourth lines, but the line of Sean Backman, Justin Auger and Adrian Kempe remained together on Wednesday.

–The Reign will not practice on Thursday as they leave for their first true road trip since a jaunt to Manitoba at the start of season. On Friday night, Ontario will face San Antonio, a team they lost back-to-back overtime games to in late October. The Rampage (9-1-4-0, 1st in Pacific) remain the one team the Reign (8-2-2-0, 2nd in Pacific) have not beaten out of all the teams they have played against this season.

“We’ve got to win our head-to-head matchups (vs. San Antonio). But I come away from those two games not feeling that we lost. I felt that we played good enough to win and we got a valuable point losing in overtime in both games,” Stothers said. “Those games I thought we played extremely well. … But knowing that we’ve got to matchup head-to-head against these guys all season long and every point’s crucial, they got two, we got one, so we’ve got some work to do to make up the ground that we lost. We’re going to go in there and try to avenge that for sure.”

The Reign will then face a team they have yet to go head-to-head with this season in the Texas Stars (8-6-0-1, 4th in Pacific) on Saturday night.

–All players were accounted for on the practice ice on Wednesday except for forward Paul Bissonnette, who injured himself a week ago in the team’s morning skate before facing San Jose. Bissonnette will not travel with the team to Texas, according Stothers. Stothers would not elaborate on Bissonette’s injury, but did say “it’s something else” when asked if it was related to the groin injury that sidelined him earlier this season.

“I keep thinking we are getting closer and every day he keeps having a setback,” said Stothers, adding that “it’s a little bit frustrating for everybody now.”

Bissonnette, a rugged veteran with NHL experience, has one goal and 10 penalty minutes in five games this season.

“It’s a big loss for us,” Stothers said. “Biss provides so much. Not just what you see on the ice, but in the dressing room. He’s a busy guy. He talks a lot. There’s energy. Even practices they’re more energized when he’s out there, morning skates, and on the bench it’s ridiculous how much he talks. It kind of gets everybody in the game. We miss him for a lot of reasons.”