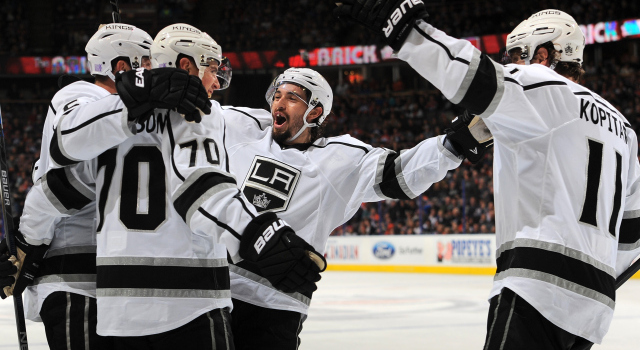 The last time the Kings embarked on a road trip longer than two games, they were fighting for their playoff right in Western Canada.

Seven months removed from the end of a season in which they won only 15 of 41 road games, Los Angeles is finally on the road for their first extended trip of the season, which will take them to Detroit, Carolina, Florida and Tampa Bay after tonight’s game in Philadelphia (4:00 p.m. PT / FOX Sports West / KABC 790 / I Heart Radio).

Having played 12 of their first 17 games at Staples Center – and winning just seven of those 12 – the Kings are ready for a change in their in-season routine.

“Yeah, we’ve been at home a lot, so I think it’s good to get on the road,” Jake Muzzin said. “It’s kind of a different feel going into games, you know you’re coming into a battle. You just want to come in, check in, get your two points and check out. We’ve done well on the road, and we’ve got to continue doing well.”

As Muzzin noted, they’ve done so through a limited period of observation. Los Angeles is 4-1-0 in their league-low five games away from home this season, with the lone loss coming in Chicago in a game in which they opened the third period with a lead. Three of the road wins have come in difficult buildings to play in, with two points being earned in San Jose, Winnipeg and St. Louis.

Overall, the Kings have outscored their opponents 16-8 in road games this season. The general blueprint to construct a road win is to rely on special teams and goaltending, and they have certainly done so: Los Angeles is 4-for-14 on the power play and 12-for-13 on the penalty kill while relying on a .944 save percentage in the small road sample size.

“I think we’re all ready for it,” Tyler Toffoli said of the upcoming road slate, in which 27 of the next 41 games will be contested away from Staples Center. “I think we know that we have to win some games on the road, and we’ve done well so far, [even if] we haven’t really had a huge case of it yet. But I think now, we’re at that time in the season where we got to win some games here on the road, and why not start tonight?”

For Darryl Sutter, it’s not the streaky balance of home and road games that’s becoming cumbersome, but rather the irregular stretch of play while the team was at home. Generally a team accustomed to playing Thursday-Saturday, the October schedule was heavy on Friday-Sunday games before the NBA’s regular season began. There have already been four stretches in which the Kings were at home with multiple nights off before a home game.

“I wouldn’t mind playing every other day like that, but we had way too many two days and three-days in between [games],” he said. “When you lose a game, you lose your edge a little bit, and when you win, you have trouble getting in game mode again. It was evident lots of times. If you look at the times where we had three days between games, we did not play very well that game coming back.”

Because the roster turnover was greater than that of any off-season since the team’s first Stanley Cup, one line of thinking is that it would be beneficial to have more time on the road early in the season, where players are hardly separated and regularly attend dinners, movies and other events together.

“I think we’ve bonded well, anyway,” Muzzin said. “It helps being on the road with just the team, in the hotel, dinners, stuff like that it helps, but you know, when you’re at home, there’s family, there’s kids, and a little bit more distractions, so I guess it helps, but I think for the most part everyone is pretty well gelled and gotten into their groove and pretty comfy with everyone here.”

“It kind of got that feeling where we spent a little too much time [at home], and the boys wanted to get on the road and start battling on the road. I mean, you’ve got to take advantage of home games, and we could’ve done a better job at doing that, but we left on a two-game win streak, and now we have to continue getting better and continue winning on the road.”

Tyler Toffoli, on constants through the team’s 4-1-0 road record:
I think just staying with it, if you look at it, I think for the games that we’ve played, besides the game that we lost in Chicago, we’ve played well, we’ve worked hard, we’ve stuck with our game, we’ve stayed together as a team, and have come up with some big wins.

Toffoli, on how to prepare for a better performance tonight:
I think it comes down to work, I think we got away from it, you saw the chances that they were getting, and the shots that they were getting, we just weren’t making the right plays, the smart plays that we do as a team, that we do well, that’s why we had to score a goal late in the game, and that was a huge goal for us obviously.