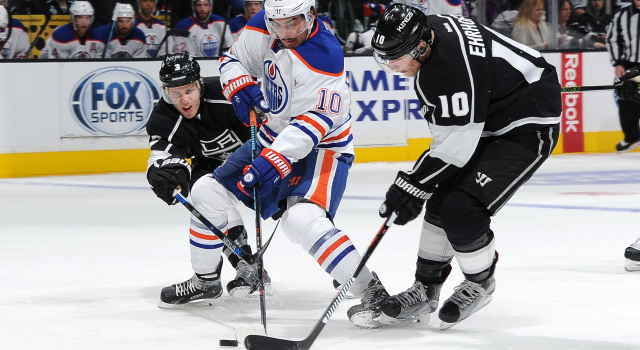 -With a 0-for-4 performance, Los Angeles stretch of scoring at least one power play goal in five consecutive games came to an end.

-The Kings have killed off 15 consecutive penalties and are 21-of-22 on the penalty kill over the last eight games.

-Anze Kopitar appeared in his 700th NHL game, becoming the eighth player to appear in 700 games as a King.

-Tanner Pearson has seven points (2-5=7) in the last six games and recorded his second multi-point game of the season. His three points (1-2=3) tied a career-high, while his two-assists set a career-high.

-The Kings attempted 60 shots (28 on goal, 19 blocked, 13 missed). The Oilers attempted 52 shots (25 on goal, 11 blocked, 16 missed). Teddy Purcell led all skaters with six shots on goal and seven shot attempts (6 on goal, 1 missed). All Los Angeles skaters registered at least one shot on goal except for Kyle Clifford, Christian Ehrhoff and Brayden McNabb.

Sunday, November 15 is a day off for the team. The Kings will return to Toyota Sports Center for practice at 8:30 a.m. on Monday, November 16 before traveling to Philadelphia.