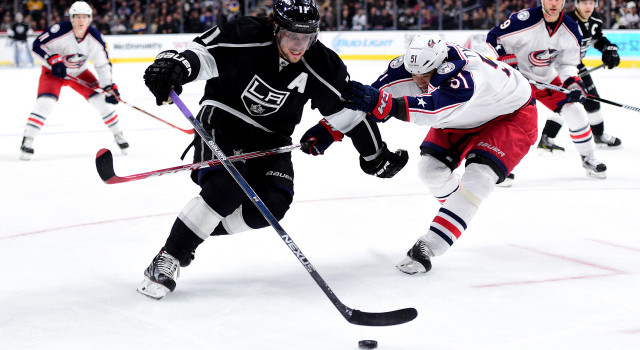 Skating before the rest of his teammates on Saturday morning was Anze Kopitar, who had taken a maintenance day on Thursday as he rested the part of his lower-body that was struck twice by pucks during the final minute of the win over the New York Islanders.

“The second one wasn’t bad at all,” Kopitar said. “It was the first one that stung a little bit.”

Kopitar is expected to be in the lineup tonight when the Kings host the Edmonton Oilers.

Though the Kings’ star didn’t like the feel of skate protectors when using them in the past, he’s keeping an open mind heading forward, given the painful episode on Thursday.

“I’m probably going to give them a try and we’ll see,” he said. “I tried them last year already, and it’s probably more in my head but it just didn’t feel the same. That’s why I took them off. You try different stuff. Obviously you want to be protected as much as you can be. But at the same time, the comfort level has to be there, too. So I’m sure I’m going to try them in the next few days.”

Anze Kopitar, on dealing with more painful incidents than normal:
Over the course of the season, there are spurts like that where you take a few in a short span of time. But then, hopefully I can go without it for a little bit, too. We’ll just have to see.

Kopitar, on whether his resilience is due to a high pain threshold:
I only don’t know. I mean yeah, I can tolerate pain pretty well. Obviously I’m fortunate that none of the big stuff or the major stuff really happened to me, besides my ankle. I guess it’s just trying to get through it, really. There’s stuff that you can play through it without getting worse, and then stuff that you have to be smart about it. For instance, last year with the three games that I had to miss. It’s one of those things where you just have to rest to get better. Because if you’re going to play and keep tugging on it, it’s going to get worse and it’s not going to help me or anybody around me. So in that instance, you have to take a couple days, even though you don’t want to. But stuff like this, it’s not going to get worse. Hopefully I don’t get hit again tonight, but we’ll see. It’s pain tolerance and I feel good, so that’s the most important thing.