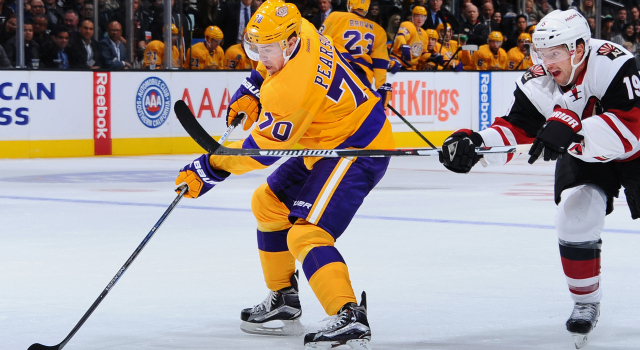 Tanner Pearson, on surrendering a 2-1 lead:
I think it was kind of back and forth all game, honestly. You don’t want that to happen, especially in our barn. I think we got a big goal off Toff there and kind of gave us back the momentum. And then giving up a goal in the last half of the second period, obviously you don’t want that to happen. And then in the third period, we let them get one and it’s unfortunate and we just have to bounce back.

Pearson, on whether Arizona is a faster team than last year:
Yeah, they’ve got some pretty good skill up front that can score goals. It showed tonight and they capitalized on their chances and I don’t think we were able to capitalize on ours.

Pearson, on whether the home record is concerning:
Obviously I think you want to be better than a .500 home team. I think that was one of our focuses coming in tonight. We know we were a game ahead of .500 at home and we wanted to keep that going, but it didn’t work out.

Pearson, on whether the team played inconsistently throughout the game:
No, I think just letting those… I think the momentum went back and forth, which I think, especially at home, you want to carry it throughout the game or get it back as quick as possible. It was kind of a weird game like that.

Dustin Brown, on where the team struggled:
We were really sloppy in our own. Just our coverage and normally we’re very good at coming out of our own zone. And tonight, we struggled with it. [Reporter: It’s like that second pass. The first pass was fine though?] Yeah, the wingers need to be better.

Brown, on whether he feels relieved to score his first goal of the season:
Yeah, ultimately it’s just about wins. But definitely from the back of your mind, you stop thinking about it. Hopefully I can build on it and again just have a complete game.

Brown, on whether his scoring drought was weighing on him:
Yeah, I mean it always does as a guy who wants to score goals and is expected to score goals. You try not to think about it, but it definitely affects you when it gets longer than normal.

Brown, on whether his goal came from the area on the ice he’s trying to score from:
Yeah, it’s a faceoff play. I think Tanner and Drew hooked up and made a good play that got broken up and it’s just a broken play. But that’s what happens when you go to the net. But also going to the net without trying to check yourself. Sometimes you go to the net too much, in a way where you’re just going into coverage. So I found a pocket in there.

Brown, on the pace of play in the second period:
I thought right after we scored, we had a lot of the momentum and we were playing in their zone a lot. I mean, that’s hockey. I don’t know what happened on the second goal. It was kind of a weird shot I think. And then they kind of started playing better. Again, it’s what we’re doing. We were sloppy getting the puck out of our zone all night tonight – the first, second and third. So we need to clean that up, help each other out.