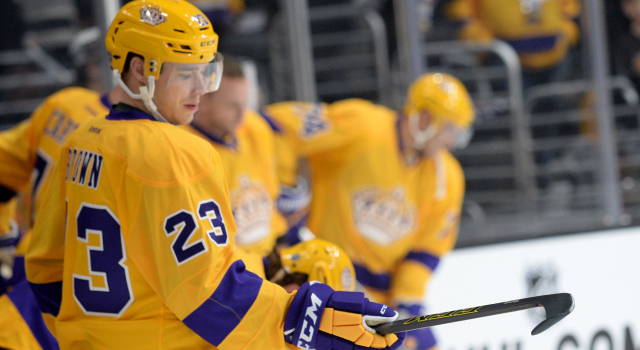 The previous error, which had read “tonight will be the only home game in which Los Angeles will sport Forum Blue and Gold” had stemmed from a misread statement in the release announcing tonight’s Legends Night, which stated, “On Tuesday night, the Kings will also wear their Vintage Jerseys as part of these special evenings, marking the only time the Kings will wear these sweaters at STAPLES Center during the 2015-16 season.”

In addition to the Legends Nights, Los Angeles will also wear their vintage gold jerseys as the road team in Boston on February 9 to mark the 50th anniversary of the founding of the franchise. As of this time, no other 1967-68 expansion teams are expected to wear commemorative vintage jerseys that honor the founding of their franchises, according to a team spokesman. The Kings received permission from the league to wear their gold jerseys on the road.

“I think they’re cool. I think it’s cool to do something like that every once in a while,” defenseman Alec Martinez said of the gold jerseys at today’s skate, though he did note that “I just wear the jersey that’s in my stall.”