From Rochester to the Hall 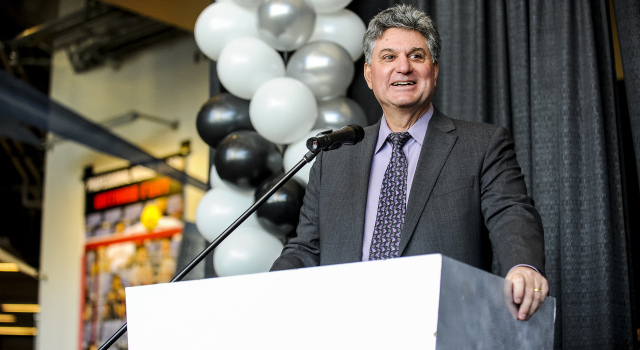 Presented to those who’ve “made outstanding contributions to their profession and the game during their career in hockey broadcasting,” the Hockey Hall of Fame’s Foster Hewitt Memorial Award will be presented to Nick Nickson at a luncheon this afternoon, nearly 40 full years after the legendary Kings broadcaster made one of the many important steps in his broadcasting career.

Five years before assistant coach Parker MacDonald had recommended Nickson to replace the departing Pete Weber in Los Angeles in 1981, Nickson had returned to Rochester, New York after having graduated from Ithaca College and spliced together a demo tape from a live college game he had broadcasted.

“Well, at the time I was just out of college. I was happy,” said Nickson, whose father was a long-tenured disc jockey who had moved to Rochester after World War II and had overseen a format evolution to rock and roll at WARC and WBBF during the time in which Elvis had emerged and the Beatles’ popularity peaked.

It was there, in his hometown, that Nickson, based heavily on his own father’s influence, but also based on the natural influences derived from an area in the Northeast in which one could spin the radio dial and gain nightly access to the beautiful assortment of words emanating from the Pittsburgh Civic Arena, or Joe Louis Arena, or St. Louis Arena, saw the roots of his own broadcasting career take hold.

“My dad was in broadcasting, and I grew up listening to him and all the other guys at his radio station, and as a youngster I used to go down to the studios on the weekend and look through the glass and see how the guys cued up the records and worked the board,” Nickson said. “So I was in that world from a young kid, and also as a kid, because my dad was on radio, at night I would listen to games. One of the great things about growing up in the northeast is at night you could get all the big-market stations, and I used to listen to the Blues games, the Bruins. I could get the Sabres when they started in ’71.”

Though his father’s broadcasting background provided a springboard towards the body of work he would undertake, it was his time in Ithaca, where he was young for the freshman class, that Nickson experienced the multidimensional work essential towards putting together a high-quality college broadcast.

“I didn’t turn 18 until December of my freshman year, and at Ithaca College, students ran the radio station, and I was on the air my freshman year. So I was getting my first taste of it, and like anything else in life, from the outside looking in it looks easy. When you have to actually do it, it’s not so easy, and that was certainly the case for me. I thought, ‘well, my dad was in radio, I’ve heard it, I know how it works, I know all this,’ but then when I got on the air I remember thinking, ‘boy, this is going to take some work, some practice and some experience,’ and that’s why having been able to do all that I did at Ithaca College – I was sports director for one year, I did all the games with other students, basketball, baseball, hockey, football, I did disc jockey shifts, did sportscasts, news casts – looking back, that was the experience on the air that led me to getting my first job in radio as a disc jockey, and my first sportscasting job with the Americans.”

Well prepared through the multifaceted work he undertook at Ithaca, his own unique experience meshed well with the influences drawn from having a keen ear to NHL radio broadcasts.

“I probably didn’t know it at the time, but I’m sure that listening to a lot of those broadcasters back in the ‘60’s and ‘70’s had to have had some type of influence on, at least in the beginning of my career, because I think everybody who starts out in broadcasting, you have people that you’ve heard that you’ve liked, that you say, ‘I want to be like that,’ so you maybe subconsciously try and sound like them, which isn’t necessarily the best way to do it. And then over time you develop your own style, your own cadence, your own rhythm, your own sound. So as far as ‘inspiring,’ it would have to be my dad, who was in radio, and all the guys – the disc jockeys – that worked with him, and the broadcasters that I listened to as a kid.”

When Rochester Americans broadcaster Lanny Frattare had opened up an American Hockey League broadcasting vacancy by taking the Pittsburgh Pirates’ radio job – Frattare was a fellow Rochester native who also had attended Ithaca College and was a 2008 Ford Frick Award nominee – Nickson was presented with an opportunity in February, 1976 to step into a prominent broadcasting position.

“I was a disc jockey. I figured that was going to be my path. My dream was to own a radio station someday, so it wasn’t like I was looking to get into sportscasting at that time, such a short time coming out of having graduated. So I sent [the Americans] a tape, and I forgot about it because I didn’t think it was very good, and they called me a week later, and said, ‘Listen, we’ve got a road trip. We’d like you to go on the trip.’ – I think it was Providence, Hershey and Springfield – and, ‘do those games, and we’ll see how it goes.”

That tryout period paved the way for a professional career that took him from Rochester to New Haven, and ultimately to Los Angeles, where he joined the Kings. Today that route takes a welcome detour to Toronto, where he’ll be honored with the 2015 Foster Hewitt Memorial Award. When his plaque is raised in the Hall of Fame, he’ll become the third Kings broadcaster whose likeness appears in the Hall, following Jiggs McDonald (1990) and Bob Miller (2000).

“Certainly I want to acknowledge all of the people that have been with me on the way on this fabulous journey, and I’m so happy that really all of my partners over the years will be there,” Nickson said. “I started with Bob, Brian Engblom is going to fly in from Tampa Bay. He’s now doing the Lightning games. Mike Allison is coming in from Fort Frances, Ontario, with his wife, and of course Daryl Evans. And I’ve worked a little bit with Jim when I filled in for Bob on TV. Bob, Jim – they’ll all be there. So it’ll be great. I’ve got some relatives from Rochester coming in.”

“The only negative is that my mom and dad will not be able to make it. My dad is 92, he can’t get around very well any more. My mom’s not going to leave him – she’s going to go where he goes. I know that they want to be there, and I understand it, they understand it. But my two sisters will be there, so it’ll be a fun time. It’ll be a whirlwind.”

And in line with the rhythm of a play-by-play broadcaster, there will be time for a joyous celebration of a distinguished career – and then, of course, the resumption of game preparation duties as he’ll return just in the nick of time to be honored with his own Legends Night, more than 40 years in the making.

“Get on a plane Tuesday, come back, land here about 2:30, come right here to Staples for another game. We’ve got the Coyotes here on Tuesday.”

Nick Nickson, on the radio station his father worked for:
When he basically got out of World War II, he moved to Rochester, 1947. He got a job at a station, WARC. It changed its call letters to WBBF, and he was there on the air for 20 years, so he was there from the start of Rock and Roll, and when Rock and Roll started, that was the first station to play the rock and roll music, and it became very popular with the kids. My dad was on the air when Elvis began and that mania, and he left when the Beatles were at their height, so he went through the whole progression of rock and roll as a disc jockey on the radio.

Nickson, on whether his parents were supportive of his radio career:
I think my parents were always ‘We’ll support them, but let’s not steer them in any one direction,’ and like so many kids who admire and idolize their parents, and in my case, what my father did for a living, it was only natural for me to think of that as a career. But it was my call, and I remember after a couple of years at Ithaca, I wasn’t really sure I wanted to do it, but then I was getting some positive feedback on my work from professors, from students, so I said, ‘OK, let’s see where it leads me.’

Nickson, on the Hall of Fame honor:
It’s interesting, because Pat Foley, who won the award last year – the Blackhawks’ TV broadcaster – called me this summer right after I was named, and he said, “Nick, it’s been a year since I’ve been to Toronto and gotten my award, and still, I walk around, ‘did it really happen?’’ So I think the reality will set in, and to be honest with you Jon, like when the Kings won their Cup in 2012, the confirmation for me was when I got the NHL guide and record book, and I turned to the Kings’ page, and it gave our record for 2011-12, and at the end it said in bold, ‘Won Stanley Cup,’ so I said, ‘It did happen, it did happen!’ And, honest to God, I did it this year, when the media guide came a couple of months ago, I went to the page that lists all the Hall of Fame members, Foster Hewitt, and there’s my name, 2015, Nick Nickson, Los Angeles Kings. So I guess it really has happened, it’s going to happen, and I’ve been working on it, what I’m going to say.