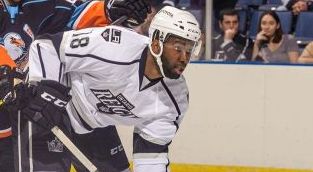 Rookie Jordan Samuels-Thomas recorded his first, second and third goals in a Reign uniform as his hat trick led the way in a 4-0 road win over Stockton on Saturday night.

It was a breakout game for Samuels-Thomas, who started the season with the Manchester Monarchs (ECHL) but was called up Oct. 21. The 6-foot-4 West Hartford, Conn., native scored twice in the first and again early in the second to record a natural hat trick.

Samuels-Thomas’ hat trick was the second in as many games for the Reign after Adrian Kempe’s on Thursday in a 4-1 win over the San Diego Gulls. The Reign (7-1-2-0) picked up their second straight win as Stockton drops to 2-5-0-1.

Reign goaltender Peter Budaj collected his league-leading 4th shutout of the season, stopping 38 shots. He and the Reign have held opponents scoreless through the last 87:59 of action.

Sean Backman opened the scoring for the Reign at 12:02 of the first period on a 5-on-3 opportunity off an assist from Nic Dowd. Backman connected on a one-timer from the left circle. It was his first goal of the year despite entering the game leading the Reign in points (9), all assists. The goal opened the floodgates for the Reign, who had been on their heels as Stockton controlled the tempo early on.

Samuels-Thomas, whistled for slashing, scored his first of three just 12 seconds after leaving the box at 16:41 of the first period, a shot from the left circle that got by starting goalie

Samuels-Thomas’ hat trick came at 2:06 of the second period on a move at the left side of the net after a set-up pass by Ryan Horvat, signaling the end of Simpson’s night in net. It was

Horvat’s second assist of the game and the secondary assist marked a milestone for captain Vincent LoVerde, who picked up his 100th point in his pro career.

With the Reign up 4-0, Stockton opted to pull Simpson in favor of Eric Hartzell. Simpson had been given the start in place of top goalie Jon Gillies, who suffered a lower-body injury the night prior against Bakersfield.

The rest of the second period was penalty-filled (10 total). That included two fighting majors a side as veteran Paul Bissonnette took on Hunter Smith and Kurtis MacDermid going against an NHL veteran in Colton Orr shortly after. The Heat got the better in both fights, really the only time the Stockton fans got into the game.

The Reign finished the night going a perfect 6-for-6 on the penalty kill. The Reign could have won 5-0. An Ontario goal was reversed and instead a penalty shot was awarded to the Reign at 17:36 with Michael Mersch failing on his backhanded attempt.

The Reign now head back to Ontario, where they will host the San Jose Barracuda on Wednesday night at 7 p.m. The Reign are 1-1 against the Barracuda this season, each team winning at home.