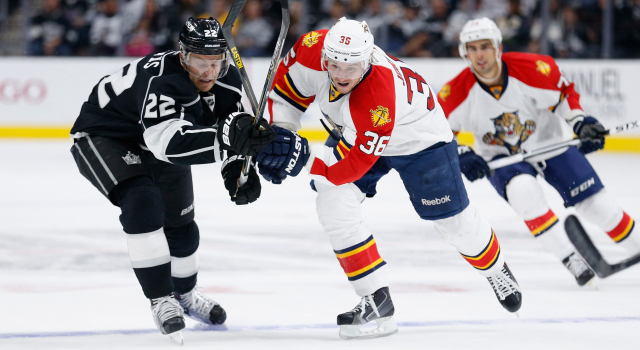 On whether momentum was built off the five-on-three kill, or whether he had already liked the team’s game:
We held our own after giving up a goal late in the first period, and obviously killing a five-on-three any time, you look at Florida, I think they’d scored four five-on-three goals of their 11 power play goals.

On Jeff Carter’s line:
They scored three goals tonight. They were clearly our best line and probably the whole game – not just scoring, but the whole package of it.

On searching for grittier goals as opposed to “pretty” goals:
Well, it’s not a ‘we’ thing, how we score in this league. If we had the answer, then we’d probably have a few more. But most of the goals are scored through special teams, through one-timers and through jam plays around the net. Tonight they were all scored like that.

On whether the team tried to get Roberto Luongo moving around in the crease:
Most teams have a number one goalie, and that’s why they’re number one goalies, because they’re hard to score on.