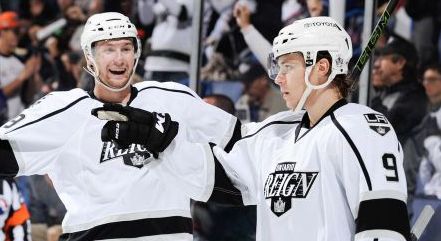 A beautiful second-period hat trick by Adrian Kempe led the Reign past the visiting San Diego Gulls, 4-1, snapping their three-game losing streak. Reign goalie Peter Budaj picked up his 6th win of the season by stopping 20 shots and Andrew Crescenzi and Vincent LoVerde each had two assists.

Best quote
Kempe, on his hat trick: “Probably the best hat trick I’ve ever had because it’s professional. I had a couple in junior but this was probably the biggest one for sure.”

Three stars
–Adrian Kempe – The skills of the Kings’ top pick in the 2014 draft were on full display Thursday night. Kempe scored three goals in the 2nd period (all in the circles or slot, and two on the power play), so let’s break down each. No. 1 at 1:27 – a shot that beat Gulls goalie John Gibson just above his pad on the short side with Kempe snapping one by from the left circle off of pass from Andrew Crescenzi. No. 2 at 10:13 – fortunate bounces benefitted Kempe as shots by Ebert and then Backman were blocked, sending puck right to Kempe who wasted no time. No. 3 at 14:05 – the hat trick goal came from a familiar place (the left circle) where he sent a low shot behind Gibson.
Hatty goal:

–Peter Budaj – The veteran netminder was as steady as ever, outplaying his counterpart Gibson from start to finish. The only shot that got by Budaj, who registered his 6th win of the season, was a Brian McGrattan tip off a shot from point at 12:01 of the second period. In a game where shots were mostly even – 25-21 Reign – Budaj was a difference-maker.
–Michael Mersch – The winger’s goal, his team-leading sixth of the season midway through the first period, got the Reign on the board early and to stay. We’re getting used to seeing goals like this from Mersch. Trailing the play and off a feed from captain Vincent LoVerde, Mersch’s initial shot rang off the post but he grabbed his own rebound and buried it while falling. The rest of the game Mersch was quite the force on the penalty kill, logging heavy minutes alongside Nic Dowd which helped contain the Gulls’ high-powered offense.
A look at his goal at 8:44 of the first period:

Turning point
–Kempe’s third goal sucked the wind out for the Gulls, forcing them into an
uphill climb too big to overcome. Didn’t help San Diego that Kempe made one of their strongest in Gibson look mighty small in net.

Stat fact
–2 – Power play goals by the Reign, both by Kempe, both in the second period, both off assists from Crescenzi.

This and that off-ice
No fans threw hats out onto the ice following Kempe’s feat. A few came at the first timeout after Kempe’s hat trick was announced. Paul Bissonnette flung the two hats that did come onto the ice with his stick back into the stands. And zing! Fans heard it from injured goalie Patrik Bartosak on Twitter.

Next up
The Reign head back up I-5, what they have coined “Fury Road” (after the movie), for their first game against Stockton on Saturday at 7:30 p.m.