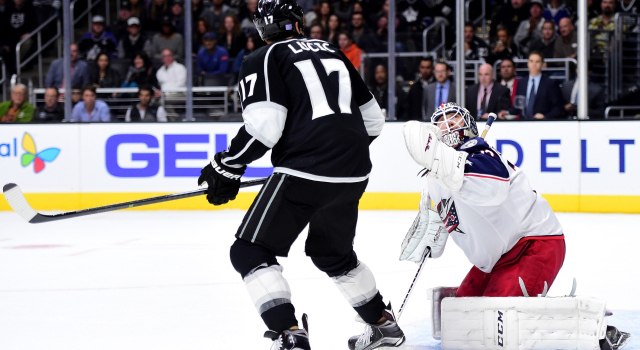 Jake Muzzin, on the loss:
We’re a better team than that. I think we all know it. Not ready to compete hard and make quick, hard plays down low, and sloppy in our zone. Not a good night. Play again shortly, so move on.

Muzzin, on being beaten territorially in the third period:
We wanted to be the one outshooting them. We kind of sat back and took a penalty and they got a little momentum built, and they created some stuff down low and got one on the rush. We should’ve ones pushing the envelope, and we weren’t. We’ve got to just regroup here and get ready for who we’ve got next. … Florida.

Muzzin, on holding Columbus without a shot in the second period:
Yeah. I mean, we were getting chances, but we’ve got to capitalize on our opportunities. We had a lot of scrums around the net that we’ve got to bang one home in. That’s a different game, then.

Muzzin, on the whistles and penalties keeping the team from building a rhythm:
It’s part of the game. There’s going to be games where it’s like that, and you’ve got to stay focused, stay in it, find ways to keep the momentum going. Our guys did an awesome job tonight fighting, and we should’ve built off that a little more than we did.

Muzzin, on not being surprised to see Jonathan Quick riled up:
No, he’s a competitor. He’s got a lot of fire in him, and he wants to win, and sometimes emotions come out like that, and that’s what happens.

Milan Lucic, on the stops and starts and emotion:
If anything, we’ve got to use that emotion and bring it into the game once those things are over and done with. I think we’re a team that feeds off emotion. It’s exciting to see, it gets us excited, and like I said, we needed to just do a better job of feeding off of it when things like that happen.