Bartosak back on ice, getting closer to return 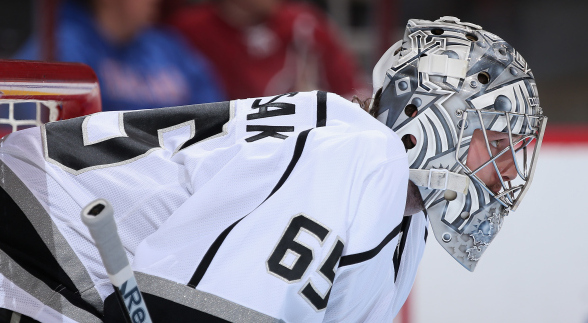 For the first time since undergoing thumb surgery on his catching hand in early October, Reign goalie Patrik Bartosak has finally progressed enough to get on the ice with his teammates.

“Yesterday was my first time on the ice after a couple weeks,” said Bartosak, who has come out once the full practice has been completed. “It felt good to be out there and my conditioning obviously needs to get better. I’ve been working in the gym and riding the bike a lot but it’s not like being on the ice and making the saves. It’s going to take a while to be back at it but it definitely feels good to be out there again.”

Bartosak has an appointment with his surgeon on Thursday morning in Los Angeles, where he said he’ll find out, “what (the surgeon) thinks I should do and shouldn’t do and we’ll go from there.”

In Bartosak’s absence, NHL veterans Peter Budaj and Ray Emery have been the team’s option in net (leading the way to a 5-1-2-0 start). Bartosak, a Czech Republic native and fifth-round pick by the Kings in 2013, was an integral part of the team’s run to the Calder Cup last season, stopping 31 shots in the game against Utica where the Monarchs secured their first title.

“It’s one of those situations where our schedule is not really demanding as far as the number of games played,” head coach Mike Stothers said. “Budaj has played real well, Ray’s here and he’s played well in his one start so again, it’s a matter of doing what’s right for Barto.

“I know he’s going to be anxious to probably push the envelope a bit but you’ve got to think for his long-term future, which is a going to be a great career as an NHL goalie. We need to monitor this correctly and well, and probably we’re going to have to do our due diligence as a coaching staff and training staff to make sure that he’s not trying to rush or come back too soon.”

His recovery process is multi-faceted: strength, motion and confidence are all part of the rehab regime.
He noted that his therapy is ongoing – “I’m not even half-way in yet” – but a return is getting closer after the rug was pulled from underneath him before this AHL season was even in full swing.

“It was very tough just because I know how hard I worked the whole summer just to get the number one job here and get the conditioning up and that kind of stuff, but at the same time it’s probably better,” Bartosak said. “If it had to happen it’s better for it to happen at the start of the year than in the playoffs or in a playoff hunt. I feel like once we got this out of the way I should be 100 percent ready for the season.”

–All players were on the ice (except the injured Kris Newbury), including veteran forward Paul Bissonnette (groin) who skating with his teammates for a second straight day, albeit in a red no-contact sweater.

“I felt really good, yeah, the groin didn’t bug me,” said Bissonnette, who was injured on the team’s opening road trip. “I felt pretty strong. Sometimes it’s nice to kind of take a step back and strengthen everything else around it. Muirsy’s (athletic trainer Mike Muir) done a great job with me and thanks to him.”

For a player like Bissonnette, an NHL veteran who’s known as a team guy, the time away has been difficult.

“It’s just good to be back around the guys,” he said. “When you’re not playing you feel like you’re kind of letting them down, especially when it’s down to injury, you want to be out there. I think they did a really good job [last] weekend, points-wise it didn’t look that way but they played hard. Just excited to get back and help out as much as possible.”

Bissonnette added: “You want to be a part of it and I like to be in the room joking around with the guys. I’m just on a bit of a different schedule when I’m not playing and injured. The last two days have been fun for me.”

So when will he be back?

–Forward Joel Lowry did not skate with a full forward line on Wednesday, so it’s unlikely that he will make his debut on Thursday when the Reign host the Gulls.

“I think maybe this week would be pushing it,” Stothers said, later noting, “he could play sparingly maybe in certain situations.”