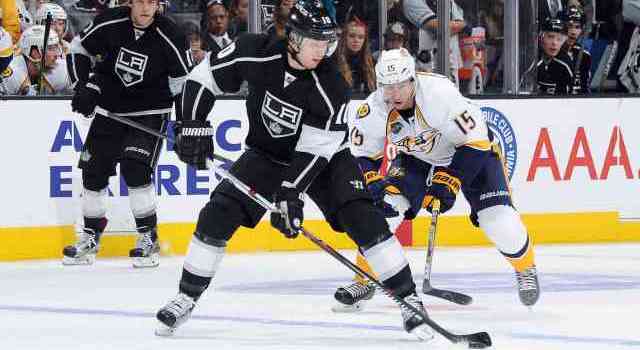 It was easy to notice Christian Ehrhoff on Saturday – and not only because he entered and left Staples Center in a bright red suit.

“It’s something I don’t bring out that often, but I thought Halloween would be a perfect fit for that,” the veteran defenseman said.

It was a suit radio color commentator Daryl Evans would be particularly fond of. It also made Ehrhoff conspicuous to reporters who were trying to get an eye on him leaving the team’s dressing room following a game in which he had absorbed a heavy Mike Ribeiro hit that resulted in a minor boarding call in the second period. Ehrhoff, who was slow to get up, traveled down the Kings’ tunnel after leaving the ice and did not return. A press box announcement said he wasn’t expected to return due to an “upper-body” injury.

Fortunately, Ehrhoff isn’t expected to miss any games and should return to the lineup when the Kings face the Chicago Blackhawks at the United Center on Monday.

“I feel pretty good today,” Ehrhoff said. “A little stiff – a stiff neck – but other than that, it’s been pretty good. I skated, so pretty good.”

That was a relief to the Kings, who despite a seven-game winning streak are also contending with an upper-body injury to veteran defenseman Matt Greene, who is on injured reserve.

Ehrhoff shared a well-defined opinion on what he thought of Ribeiro’s hit.

“I came in, I made a reverse play, and I was in a vulnerable position at that time, and he just finished a check through with full force, and it’s just a dirty play,” he said.

At this time, there is no indication that the league will step in with supplemental discipline.

“That’s nothing in my hands,” Ehrhoff said. “It was a check straight to the numbers, and that’s something the league wants to take out of the game, and I’ll leave it at that.”

Given that Ehrhoff experienced two concussions in Pittsburgh last season – he didn’t play after March 24 – there was particular alarm over Saturday’s hit.

“It’s always scary, those things,” he said. “The first little while you don’t really know where it’s going, but later in the night it seemed to be that it wasn’t really something bad.”

As for the other aspects of the game, Ehrhoff’s slick pass to Tyler Toffoli during a second period power play caught the Predators defense by surprise and led to a Toffoli backhander that opened the scoring.

“Obviously we have been scoring some key goals on the power play, which is what a good team needs,” Ehrhoff said. “Yeah, we’re working at it game-by-game. As a defense, we probably – and myself – can do a better job getting pucks on the net, too, and creating some more second opportunities and not getting shots blocked or missing the net. That’s something we can put our focus on.”

He’ll have the opportunity to put that into practice during tomorrow night’s rivalry game.

“He should be fresh,” Darryl Sutter said, dryly. “He’s only played a few minutes in the last week, so he should be really good for the next two.”

Jhonas Enroth, on whether he expects to play in one of the two games on the trip:
I do. Usually when it’s a back-to-back, I usually hope to get one of the games, but we’ll see what happens.

Enroth, on earning a win in his first game of the season:
It was nice to get a game in, obviously you get a little bit more comfortable playing with the team and feeling like you’re a part of the team.

Enroth, on the two-game mini-road trip:
It’s two tough teams, I guess. Both teams are playing well, I think, so it should be a tough road trip. But we’re playing pretty well right now, so I’m sure it will be a good road trip for us.

Enroth, on his relationship with Jonathan Quick:
It’s great. He’s a very good guy, very laid back. It’s great playing with him.